The agency, in a statement on Monday (June 24), called on the public to co-create the ending of Kinship, a six-minute film about cherishing family ties and brotherhood that was released on May 30, ahead of Hari Raya Puasa.

The public can share the ending that they would like to see by posting their ideas on PUB's Facebook page or sending an e-mail to pub_fow@pub.gov.sg by June 30.

Three people will be selected to attend an exclusive workshop with PUB and the creative team behind the film, the agency said.

PUB's first festive short film tells the story of two brothers who grew up in an orphanage in the 1960s but later fell out after older brother Din learnt he would be adopted.

There are many words left unsaid as the pair part on the morning of Hari Raya.

The film closes with Din returning to an old reservoir they used to play at, where he sees a message carved on wood by his brother years ago.

However, it ends in a cliff hanger and it is unclear if Zul appears.

The film garnered over 1.5 million views since its release on the agency's Facebook page and YouTube channel.

Its message of mending relationships and family reunion, which is central to the spirit of Hari Raya, left many Facebook users teary-eyed. Many netizens also called for a sequel that will see the brothers reunite.

"We did not expect such overwhelming response from the public towards Kinship," said PUB's director of 3P Network Cindy Keng. 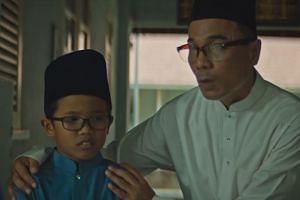 "It is particularly heartening to see how the film had brought people together, and generating conversations about the preciousness of kinship and the water-saving message embedded in the film," she said.

The film was inspired by the Malay proverb "air dicincang tidak akan putus", which translates to "water does not break apart when you chop it", a reference to family ties.

It is part of PUB's year-long water conservation campaign, which aims to drive home the message that everyone has a part to play to use water wisely.

Mrs Keng added that the public's positive reaction had spurred the agency to think of ways to engage the public in co-creating a closure for the brothers.

The public can watch the short film on PUB's Facebook Page at bit.ly/PUBkinship