NEA officers fan out in Aljunied to educate residents about disease, prep them for battle

While details of Singapore's first local case of Zika infection are only beginning to emerge, the National Environment Agency (NEA) has already taken steps to monitor the situation at Aljunied Crescent and prepare residents for battle.

When The Sunday Times visited last night, posters had been put up at the lift landings of Block 102, providing background information on Zika. Another poster informed residents that fogging of the area would take place this morning. Five NEA officers were seen in the area last night distributing leaflets and bottles of insect repellent spray.

A 47-year-old Malaysian woman who lives in the block was yesterday confirmed to have the Zika virus. It is the first locally transmitted case in Singapore. 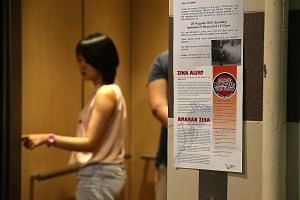 MacPherson MP Tin Pei Ling said she is in touch with the Ministry of Health for regular updates.

"I urge pregnant ladies to monitor your health especially carefully, as Zika can affect the development of an unborn child. As a mother, I am deeply concerned about this and had in fact raised this issue in Parliament earlier this year," she said. She noted on Facebook last night that Block 102 is not an active dengue cluster, but added that NEA will be thermal fogging the area today as a precautionary measure.

Mr Aloysius Yeo, 33, an oil and gas project engineer living on the 12th floor of the block with his family, said two NEA officers came to his flat in the afternoon to do chemical-spraying, and others later came around to give him a leaflet and a bottle of repellent.

He said there have been many mosquitoes in the area in the past year and, after learning about the latest Zika case, he now puts repellent on his three children and has stopped them from going to the playground downstairs.

I urge pregnant ladies to monitor your health especially carefully, as Zika can affect the development of an unborn child. As a mother, I am deeply concerned about this and had in fact raised this issue in Parliament earlier this year.

Ms Vidya Viswanathan, 25, who came to Singapore five months ago to pursue a master's degree in accounting at James Cook University Singapore, said: "I'm worried my exams and assignments and everything will suffer if I get it."

Her mother Jeyashri Krishnamurthy, 54, a chartered accountant who is visiting her from India, said : "I'm really getting worried about this Zika thing. We take every precaution - no plants, no water anywhere. I hope it (Zika) stops here."

Polyclinic maintenance worker Myo Min Soe, 40, and his colleague Kyaw Soe Thet, 34, had not heard the news when The Sunday Times visited them on the third floor of Block 102. They said they had taken the stairs and had not seen the posters at the lift landing.

Mr Myo Min Soe, who had been living there for about eight months, said: "We are going to start protecting ourselves with insect repellent."

But he and Mr Kyaw Soe Thet are not that worried. "It's not just this place, we need to be careful everywhere," he said.

Although the latest Zika patient has not been to Zika-affected countries recently, Mr Myo Min Soe suggested she may have caught it from someone who has.

Meanwhile, also remaining vigilant are members of Team Singapore who competed at the recently concluded Rio Olympics. Mr Low Teo Ping, Chef de Mission for Team Singapore, said its members had returned to Singapore symptom-free and are being monitored closely.

Areas in the vicinity of the first case of Zika