Scientists here have, for the first time, uncovered a possible way that the Zika virus damages an unborn baby's brain.

The mosquito-borne virus targets a type of cell responsible for brain structure, the study found.

These cells - called microglia - were the most damaged after infection, researchers discovered. Microglia direct nerve cells to form properly to create brain structure.

"If they are infected and inflamed, their communication to the nerve cells will also get messed up," said Professor Lisa Ng from the Agency for Science, Technology and Research's Singapore Immunology Network, who led the study.

Microglia had been neglected earlier, as scientists focused their efforts on how the virus affected nerve cells, which, it has emerged, may not be its key target despite being damaged as well. 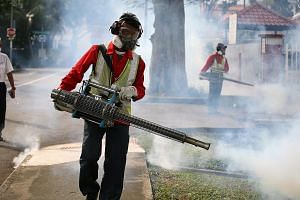 Another researcher in the study, Associate Professor Jerry Chan from KK Women's and Children's Hospital (KKH), said: "What we show for the first time is that it is actually the microglia cells that are hit badly and that may be the reason as to why brain growth is dysregulated and abnormalities arise."

Zika infections have been linked to microcephaly, where affected babies have abnormally small heads and may develop conditions such as intellectual disability and problems with speech and movement.

The local research is the first to look at the effects of a Zika infection on human foetal tissue, and hence may more closely reflect what actually happens. Previous studies have used mice models or cells cultured in the laboratory.

Prof Chan, a senior consultant at KKH's department of reproductive medicine, said: "The high load of Zika in microglia suggests that it is one area we should devote our resources, to try and understand what happens when you infect microglia and how it affects neuronal progress, differentiation, growth and function."

Next, the researchers will study how the inflamed microglia cells influence other cells around them. They hope eventually to be able to prevent or treat the inflammation, possibly through the use of a drug.

"Right now, it is at an extremely early stage, but it is exciting times for us because it opens up numerous questions on what we can do," added Prof Chan.

Commenting on the effort, Emeritus Professor Duane Gubler from the Emerging Infectious Diseases Programme at Duke-NUS Medical School said although the Zika virus has been evident for over 70 years, very little is known about it, including how the disease develops.

"Studies such as this are very important in helping us understand the biology of this virus and, ultimately, to develop more effective treatment, prevention and control."

Associate Professor Chan Shiao- Yng, a consultant at the National University Hospital's Women's Centre, said: "The central questions are what makes only a relatively small proportion of foetuses vulnerable... and how these... cases could be identified in a timely manner."