Ms Vivian Pan's troubles started when she posted an appeal for $1 donations for Ms Tang Zhi Ling, 33, on Facebook earlier this month.

Ms Tang had contacted Ms Pan just after she was diagnosed with stage 2 cervical cancer.

Ms Tang, a single mother, asked if she could get $40 in supermarket vouchers in exchange for three tins of Milo that she had at home. She was worried about household expenses and thought the vouchers would come in handy for fresh food in the future.

But when netizens offered groceries, Ms Pan rejected them. The donations were also directed to Ms Pan's bank account, not Ms Tang's.

"I rejected the items because her two-room flat is already so cramped and there is no space to move around. I used my bank account because I was worried that she would lose any applications for help schemes if the money went into hers," said Ms Pan, 30, a personal assistant.

In response to the online suggestions of impropriety, Ms Pan posted her bank statements on her Facebook page, detailing the online donations for accountability.

Ms Tang also opened a new bank account so donations could be channelled there. 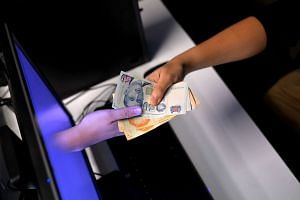 "It is my first time fund raising, and I didn't know that there are these rules and that we need to provide this information," said Ms Pan.

Ms Tang, a warehouse packer, never doubted Ms Pan. "She is a good person and I trust her completely because she and her group of volunteers have been coming over to change our lights and cook for us," said Ms Tang.

She intends to use the $10,000 in donations on her son, 10, and daughter, six, and household expenses. She will soon have to leave her job, which pays $800 a month, when she undergoes chemotherapy.

The National Volunteer and Philanthropy Centre (NVPC), which runs the national online donation platform Giving.sg, said it has received a few requests from individuals who needed to raise funds for medical expenses. As Giving.sg hosts only fund-raising appeals supported by charities, NVPC linked them up with charities.

These charities will front the appeals after checking if the causes are legitimate and handle the donations. For instance, the Rare Disorders Society put up an online campaign last year for Teo Pei Shan.

Said an NVPC spokesman: "We applaud all forms of giving, whether it is through ground-up initiatives or charities. However, we also urge individuals to find out more about the causes they are supporting, and research the beneficiaries and how the money would be used."