Singapore is seeking new ways to cut its reliance on sand - even as it contends with the challenges of trying to address the shortage by importing the resource from neighbouring countries.

The Ministry of National Development (MND) said it is "highly challenging" for Singapore to achieve self-sufficiency in sand. This is unlike what has been done with water and electricity.

An MND spokesman said in a statement: "The immutable fact that sand is not a natural resource in Singapore means that it would be highly challenging to achieve self-sufficiency in terms of materials needed for our reclamation and construction projects."

This means that Singapore is vulnerable to sand shortages, especially when its neighbours cut off supply. But it is constantly on the lookout for new means to reduce its reliance on sand, said the MND.

For instance, it recycles excavated materials discarded by other construction projects to replace a proportion of sand in some reclamation projects. 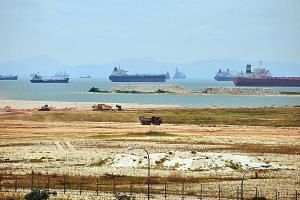 Strict rules in place for import of sand: Government

It has also piloted a new reclamation method, called empoldering, traditionally used by the Netherlands. Land expansion in Pulau Tekong will have a polder development later this year and is slated for completion in 2022.

Empoldering involves building a dyke around the area to be reclaimed and draining water from it, creating a low-lying tract of land below sea level, called a polder. It is said to reduce the volume of sand needed.

The MND said it will monitor the polder development during and after reclamation: "If it is successful, we may explore using the method in other reclamation projects... where applicable and economically viable."

Engineers are also working on other innovative ways to solve the land shortage problem here.

Nanyang Technological University professor Chu Jian has proposed creating waterfront cities or offshore islands by building walls in the sea, draining the seawater, then laying a floating platform over it. He said intensive research and field trials have been conducted over the years, and large-scale applications have been implemented recently.