Over the next 15 years, 10,000 to 13,000 trees in Singapore could be removed to make way for transport and housing projects - an ongoing trade-off between nature and development.

But the National Parks Board (NParks) is taking steps to mitigate against the possible impact, it tells The Sunday Times.

All the affected trees will be replaced at least one-for-one, it said, adding that it is likely even more trees will be planted in their place.

The 10,000 to 13,000 range is a "working figure", based on development projects in the pipeline, to help it plan how many trees it needs to replant in advance, the statutory board noted.

Singapore has about seven million trees, of which six million - along streets as well as in parks, state lands and nature reserves - are in areas managed by NParks. The Sunday Times understands that some developments that will affect trees are the North-South Expressway, Thomson-East Coast Line and Jurong Region Line. 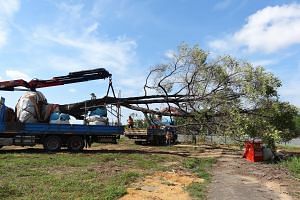 Journey of a tembusu

There are also works such as the Jurong Lake Gardens project, expansion of Changi Airport and upcoming housing estates in Bidadari, Tengah and Tampines North.

NParks' deputy chief executive Leong Chee Chiew told The Sunday Times that because Singapore is not just a city but also a country, this leads to "intense land-use demands"."We need to work a lot harder and smarter than other cities. As an agency, we work very closely, collaboratively with other agencies to anticipate what are some possible disruptions."

By working with agencies like the Land Transport Authority (LTA) "very early on" in the planning stage, NParks can, say, evaluate if plans could be modified to save certain trees. For example, it could work with LTA on modifying the alignment of a road.

"We have the advantage of being able to plan way ahead of time," he said. But he noted that development projects could change over time so the projection may not reflect what will happen in the next 15 years.

To the best of his knowledge, Dr Leong said no heritage trees will be affected by the planned developments. But he was unable to offer more details on the age or range of species of the trees that will be affected, saying it is still too early to tell.

While most of the trees to be removed will be used for mulching and biofuel or be recycled, a small proportion will be salvaged - often transplanted to a holding site before being replanted elsewhere.

Whether or not a tree is salvaged depends on factors such as historical significance, size and species.

The size of a tree determines how likely it is to survive the transplantation - larger trees have a more extensive root system, which makes them more likely to suffer damage when moved. Some species are also more suited to transplantation.

In recent years, NParks has been moving towards a system of replanting where different plant species are grown in layers, mimicking a forest environment. This allows for greater biodiversity. There has also been a push to grow more native species.

The replanting will depend on the site and could involve shrubs, saplings, semi-mature trees and mature trees.

NParks has been planting 40,000 trees every year since 2015, in parks and for replacement. Trees for replanting are largely obtained from tree banks, home to more than 11,000 trees, and Pasir Panjang Nursery which has 200,000 plants.

NParks said it can nurture 700 to 800 trees that are at least 3m tall for replacement each year.

Nature Society president Shawn Lum said the loss of older trees might be "jarring" at first.

"The character of the area will change if big trees are cleared and replaced by things not as majestic."

But Dr Lum added: "It's quite a good opportunity as well, to rethink greenery from a whole landscape scale... (as) a more seamless integration of roadsides and parks with the forest." He doubts the various developments will affect any endangered tree species although the Bidadari area, a haven for migratory bird species, might suffer an ecological impact when trees are removed.

Mr William Lau, former president of the Singapore Institute of Planners, and now the International Federation for Housing and Planning's ambassador for South-east Asia, said: "Removing 10,000 to 13,000 is a small percentage compared to the total greenery (in Singapore). "As such, it has no significant impact on the current good balance between urban development and greenery."