SINGAPORE - Repair works were under way on Wednesday (Sept 27) morning after a burst pipe caused water to gush to a level "up to three storeys high" in Bukit Batok West on Tuesday night.

The pavement nearby was covered by a thin layer of reddish, mud-like substance. A faint smell of mud permeated the air.

The Straits Times understands that the ground near the burst pipe was excavated on Wednesday morning, and mud from the ground was heaped in a pile next to it. Remaining water from the pipe was drained into the canal until around 8.30am.

In a Facebook post just before noon on Wednesday, PUB revealed that the leak occurred on one of its major pipes which supplies water to people living in Bukit Batok. The leak was detected by PUB's sensors, and staff were immediately sent down to the scene.

The pipe, which has a diameter of 70cm, was laid in 1982 and had never leaked before this.

Said the agency: "As this is one of the major pipes supplying water to customers at the Bukit Batok estate, PUB had to first carry out a series of valve operations to draw water from other unaffected watermains before shutting the valves to stop the leak. This is to ensure water supply to our customers in Bukit Batok is not affected.

"As this watermain is located 4m underground and near to other services/cables, we have to take necessary precautions in carrying out the excavation and subsequent repair works."

A lane along Bukit Batok West Avenue 6 heading towards Bukit Batok Avenue 1 has been closed to traffic to facilitate the repair works.

PUB said that it expects the repair works be completed by Friday. It is still investigating the cause of the leak.

Bukit Batok resident Ong Ting Be, 63, told The Straits Times that the water was "like a waterfall... not just a narrow jet of water, but a whole expanse gushing out".

The retiree, who arrived at the scene around 11pm and stayed till past midnight, added: "I came down to see it because I was curious. We all liked looking at it going up and down, like a fountain, shooting higher than the street lamp."

He said that around midnight, one of the traffic lights toppled over as the nearby ground was "very loose", but no one was hurt as the area had been cordoned off. 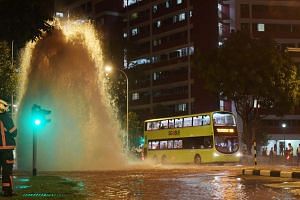 Products technician Nirmala A. M. Karrupiah, 49, was in car on her way to Bukit Gombak at around 11.30pm last night. Traffic police were at the scene to guide vehicles along, she said.

Rather than going straight down Bukit Batok West Avenue 6, her cousin who was behind the wheel turned into Avenue 8 instead.

Said the Bukit Batok resident: "It was a new fountain in Bukit Batok! It was flooded, and a bit of a shock, something we'd never seen before."

In a Facebook post early Wednesday morning, PUB said that it had isolated the pipe leak at 1.50am and that repair works were ongoing.

The leftmost lane along Bukit Batok West Ave 6 will be cordoned off so repair works can be carried out, it added.

PUB first received reports of the leak at 9.53pm on Tuesday.

Residents compared the water bursting out to a "fountain". According to passers-by, the water weakened after midnight, leaving mud and debris such as "stone chips" on the road.