BRUNEI - At a night market where two children are queueing for food, a suicide bomber detonates the explosives on her body.

Minutes later, another bomb goes off just metres away, where an unattended parcel was lying.

When the survivors scurry for shelter at a nearby car showroom, two more bigger bombs go off there.

These were the scenarios posed to police investigators from Singapore and Brunei, at a biennial exercise to hone the investigators' post-blast investigative techniques.

The media were given access, for the first time, to the three-day Solar Wind exercise in Brunei which ended on Thursday (Oct 3).

Unlike previous iterations, this year's exercise is the most complex as it features multiple bombs at different locations, said Mr Sito Wai Yip, officer-in-charge of the Singapore Police Force's bombs and explosive branch.

Through this exercise, investigators will learn to coordinate their efforts with each other, he said.

"This coordination is the most difficult, as inputs (like evidence) from each scene must be communicated in a timely manner, so we will not lose track of the perpetrators," said Mr Sito. 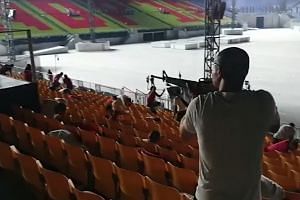 Terrorism is still a serious threat; report those suspected of being radicalised: MHA

"We hope the officers will become more familiar with their procedure and drills, and gain more useful on-the-ground experience," he added.

To simulate urban conditions, mannequins, wooden stalls, a car and motorcycle were set up in a Brunei field, and around 30kg of explosives were detonated at the two scenes.

Investigators were kept in the dark about the nature of the explosions, and they had to develop their hypotheses for the blasts by processing and looking at evidence such as the bomb fragments, size of craters in the ground, and explosive residue.

Brunei's Assistant Commissioner of Police, Dato Paduka Haji Mohammad Hassan Pehin Penyurat Haji Ahmad, said that such exercises have helped to build and strengthen the rapport between the two countries.

The Solar Wind exercise started in 2014, and this was its fourth edition.

"We need to continue this so we can exchange expertise and learn from each other's experience and be prepared, especially with the current (terrorist) situation in the region," he said.

"We monitor incidents around the world and learn what are some of the new modus operandi adopted, so we can prepare ourselves to respond to such incidents in Singapore," he said.

Having a realistic training scenario with real bombs, as was done in this exercise, helps ensure that officers are operationally ready, said Mr Sito.

"While real-life experience is a bonus, what is essential at the end of the day is subject-matter knowledge such as the correct investigation tools. This can be achieved through training " said Mr Sito.

As the SGsecure slogan goes, "a bomb incident is not a matter of if, but when", he added.