Forests may look calm from afar, but the cacophony of the sounds of nature tells a different story.

The Central Catchment Nature Reserve is a treasure trove of wildlife. Here are some of the rare mammals that can be found in Singapore's largest nature reserve: 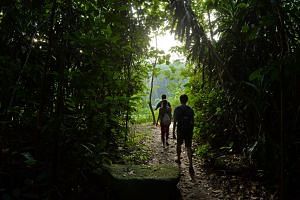 The Sunda pangolin is critically endangered globally as it is poached for its meat and scales.

Critically endangered here, the lesser mousedeer inhabits primary and mature secondary rainforests. It is the smallest hoofed animal in Singapore.

Critically endangered in Singapore, this nocturnal creature is usually slow, but can move quickly when catching prey.