A day after they were criticised for a "mock, insincere apology", YouTuber Preeti Nair and her brother Subhas offered a fresh "unconditional" apology for their controversial rap video.

In a lengthy statement on their social media accounts yesterday, the Nair siblings said: "We have apologised but we understand that more needs to be said and done."

They added: "We unconditionally apologise for the tone, aggression, vulgarities and gestures used in the K. Muthusamy music video."

The siblings were referring to the video they created last week in response to a "brownface" advertisement featuring Chinese actor Dennis Chew. They titled the rap K. Muthusamy - one of the characters Mr Chew portrayed in the ad, a man with visibly darker skin tone.

Both the ad and rap video stoked a controversy over racial sensitivity in Singapore with many people, including politicians, describing them as being offensive and unacceptable. Police reports have been made against both.

The earlier "apology" by the Nair siblings on Friday closely followed the wording of a statement issued by the creative agency and management company involved in producing the e-payment ad.

Shortly after it was posted online, the Ministry of Home Affairs (MHA) slammed the statement by the brother-sister team, saying it contained a "mock, insincere apology".

"This spoofing is a pretence of an apology, and in fact shows contempt for the many Singaporeans who have expressed concern at their blatantly racist rap video," the ministry said. 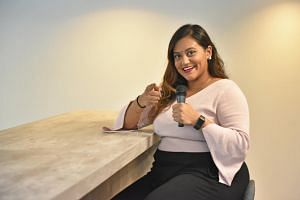 Yesterday, the siblings acknowledged that people were offended and said they "sincerely" apologised for it. "If we could do it over again, we would change the manner in which we approached this issue, and would have worded our thoughts better," they said, claiming that they "only wanted to spark a conversation" on the portrayal of minority races in Singapore.

Separately, in the statement, Ms Nair also addressed public discussions about past videos that she created, particularly a Chinese New Year video in 2018.

MHA had cited the video to show that it was not the first time the siblings expressed racist sentiments.

The ministry's statement said: "About a year ago, Ms Nair published a video where she acted as a Chinese and mocked the Chinese community's practices, culture and traditions. She portrayed Chinese as money-minded gamblers."

Ms Nair insisted yesterday that her videos were always parodies, satire and discussions on social causes in unconventional ways.

She said: "If you watch the video in its entirety, you would understand the jokes made and the self-deprecating, ridiculousness that is Preetipls."

Mr Nair also sought to defend his song Utopia, which was called out by MHA for saying that Singapore condones systemic discrimination.

He said his song was about justice in Singapore for migrant workers and that he unequivocally stood behind it. "My only wish is to bring to light the stories on the sidelines and that are invisible in the Singapore narrative," Mr Nair said.

The siblings concluded their statement by apologising yet again for the hurt they caused, and Ms Nair urged members of the public to refrain from circulating the video as requested by the police.