As the Islamic State in Iraq and Syria (ISIS) rolled through large swathes of territory in both countries in 2014, supporters of the group around the world began reporting on its victories online.

In Indonesia, scores of them marched through the centre of Jakarta on March 16 that year, holding up the terror group's black flag.

They handed out glossy leaflets extolling its quest to form an Islamic state, boot out foreign armies from the Middle East, and unite Muslims worldwide under a single leader.

Photographs and videos of ISIS' battles and events such as the march made their way onto social media and militant websites.

In Singapore that year, a handful of individuals began viewing such material on Facebook and YouTube, among other sites.

Such posts and videos of ISIS' exploits played a significant role in the radicalisation of 15 of the Singaporeans who have been dealt with under the Internal Security Act (ISA) since 2014, Insight found. 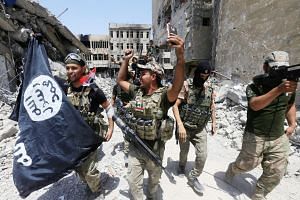 Under Singapore's approach to managing those who pose a threat to national security, individuals believed to have been sufficiently radicalised are picked up or arrested under the ISA.

No-one can be held for more than 30 days from the time of arrest without a detention order. If there is good reason to keep them in custody, a case to detain them is made for Cabinet to approve, and the President to endorse. An order of detention is valid for two years and must be renewed every two years.

Most researchers looking at the issue of radicalisation note that it is a highly complex process, shaped by a range of factors including personal circumstances and deeply held grievances.

Likewise, the extent to which a person is radicalised also varies.

While little has been made public about the motivations of those picked up for ISIS-related activities in Singapore, a closer study of the circumstances that led to their support for ISIS and, in many cases, plans to travel to Syria, reveals three broad ways in which they were radicalised. These are: social media posts and online material; radical preachers - online and over the radio; and "influencers" or radicalised persons who win over others to their point of view.

Insight breaks down 15 cases based on how they were mainly influenced.

SWAYED BY SOCIAL MEDIA, SOME PLANNED TO GO TO SYRIA

Among the Singaporeans who were led astray by ISIS' social media posts and videos was Asrul Alias, a technician in his 30s. He began viewing online religious sermons by radical preachers, as well as videos of ISIS fighters in combat.

He shared some of the material on social media, where he also countered criticisms of the group and its actions that he came across online.

But a family member and a close friend who came to know of his support for the group warned him to stop posting radical material online in late 2015 and early 2016.

He heeded their warnings, but continued viewing such material.

Asrul came to the attention of the authorities, who picked him up for investigation in August last year. Investigations showed he had become radicalised, but the Home Affairs Ministry said he was not an imminent security threat. As a result, he was not detained further but placed on a Restriction Order (RO), which restricts his movements and activities including travelling abroad.

Like others on RO, he also undergoes regular religious counselling with members of the Religious Rehabilitation Group, whose task is to guide them to the mainstream understanding of Islam and away from leanings of radical preachers.

Similar videos, websites and social media posts propagated by radical ideologues played a role in the radicalisation of at least two 17-year-old students who were discovered by the authorities.

Both were not named due to their young age, but in the case of the first student, arrested in May 2015, he wanted to take up arms alongside ISIS and had started making preparations to carry out his plans.

In the case of the second student, a recent graduate from a madrasah whose case surfaced in mid-2016, investigations showed he learnt about ISIS through mainstream media reports and formed a positive view of the group. After attending a talk on terrorism, he disagreed with the speaker's negative assessment of ISIS and went online to look for more information.

He also harboured the intention to fight for ISIS in Syria where he was prepared to die a martyr, sought out like-minded persons online, and tried to influence his friends. Despite their objections, he persisted in supporting ISIS.

Four other individuals - all detained in 2015 - were radicalised online to the extent that they actively made plans to join ISIS in Syria.

Arifil Azim Putra Norja'i, then 19, was the first self-radicalised Singaporean to be detained in April with the intention of carrying out attacks here. He looked up information on travel routes and how to make improvised explosive devices, and decided that if he could not join ISIS, he would kill the President and Prime Minister. (see other story)

In late May, Mustafa Sultan Ali, 51, left Singapore for a regional country and boarded a flight to Turkey, with plans to cross to Syria to join ISIS. He was detained by Turkish authorities and deported to Singapore, where investigations found he had been deeply radicalised online and was prepared to carry out ISIS-directed attacks against Western establishments in Singapore.

Former security guard Muhammad Shamin Mohamed Sidek, 29, planned to travel to Syria once he had raised enough money for the trip. If he could not join ISIS, he would consider fighting alongside a regional group aligned with ISIS. He had been convicted and sentenced to three months' jail in May 2015 for inciting violence through pro-ISIS social media posts, and continued to express unstinting support for ISIS while in prison.

Muhammad Harith Jailani, 18, collected information on travelling to Syria and tried to radicalise and recruit those around him to join ISIS.

A fifth case involves Singapore's first female to be detained for radicalism, in the latest ISIS-related arrest announced last month.

Syaikhah Izzah Zahrah Al Ansari, a 22-year-old infant-care assistant, planned to go to Syria with her young child. She began to be radicalised in 2013 by ISIS material online, where she forged a network of contacts with foreign militants and supporters, and planned to look for a "salafi or ISIS supporter" to marry and settle down with in Syria.

Then there is the unusual case of Wang Yuandongyi, then 23, who left Singapore in January last year for a third country, from where he planned to travel to Turkey and then Syria - but to fight with a Kurdish militia that was combating ISIS.

He was sent back to Singapore, and placed on an RO. The ministry noted that he was looking to escape from personal setbacks, like financial liabilities from a failed business venture, and began to empathise with the Kurds after learning about their plight online. In announcing his arrest, the Government said it takes a stern view against anyone who supports or plans to engage in armed violence - regardless of how they rationalise it or where it takes place - as they are deemed to pose a threat to Singapore's security.

Last July, Singaporean Zulfikar Mohamad Shariff, 44, was arrested when he returned to Singapore for a visit. The graduate student had resettled his family in Australia where he set up and kept in contact with radical preachers, and made numerous Facebook posts glorifying ISIS and its actions.

The authorities say Zulfikar had embarked on a radical pathway as early as 2001, when he suggested that Muslims take up arms in Afghanistan after the Sept 11, 2001 terror attacks on the United States.

Among such "influencers" were Australian ISIS advocate Musa Cerantonio, and American Anwar Al-Awlaki, who was killed by a drone strike in Yemen in 2011.

Awlaki's videos continue to proliferate on YouTube - often innocuously pitched as guidance for those seeking to be better Muslims.

Radical preachers have played a role in encouraging individuals to join groups like Al-Qaeda and ISIS.

Zulfikar himself influenced at least two others to radical ideology.

He looked into holding training programmes to radicalise young Singaporeans, and from abroad, sought to agitate Muslims here to his point of view, which includes pushing to replace the democratic system with an Islamic state.

One of those he influenced was Shamin, who was detained in 2015.

Another was businessman Saiddhin Abdullah, 33, who was inspired by, and shared, Zulfikar's social media posts, and was issued with an RO last year.

The influence of radical ideologues also proved too strong for former detainee Muhammad Fadil Abdul Hamid, 27, who was re-detained in April last year. He had previously been detained from 2010 to 2012 for planning to take up arms in Afghanistan, and was out on an RO.

While he made some progress reintegrating into society, he became drawn to radical online material again, including the teachings of ideologues like Al-Awlaki, and planned to join militants in Syria.

While the Internet has been a common link in all the cases, four individuals dealt with in August last year had a common thread: Radio Hang, a Batam-based religious radio station with a salafi orientation - one which believes Muslims should live the same way the earliest Muslims did in the 7th century.

Car washer Rosli Hamzah, 50, began listening to Radio Hang in 2009, and in 2014, was introduced to ISIS material through social media contacts sharing his religious orientation. He was keen to travel to Syria to fight for ISIS and shared its radical content on social media, and was detained.

Waste truck driver Omar Mahadi, 33, begun listening to the station in 2010. He too imbibed ISIS ideology and made plans to travel to Syria with his wife, contacting a Syria-based South-east Asian fighter who was later killed in combat. Omar was detained, and his wife Dian Faezah, 34, and building technician Mohamad Reiney, 26, who is related to the couple by marriage, were placed on ROs.

While they were initially not drawn in by the hardline views and practices of groups like ISIS, which even other militants roundly reject, influences like those of Radio Hang encourage an exclusivist mindset that sees the world divided between Muslims and non-Muslims.

And once such beliefs are imbibed, they make individuals more susceptible to ISIS' ideology, which some observers term "salafi-jihadist". Those who subscribe to this view are very much in the minority.

However, many of those who are radicalised by the likes of ISIS have adopted a similar approach to their religion - as the terror group places an inordinate emphasis on the military struggles of the earliest Muslims in a bid to lend divine sanction to ISIS' present-day violence.

But a recent guide published by the Islamic Religious Council of Singapore to help families protect their loved ones lists several signs to watch out for and that would signal intervention may be needed.

Among them: cutting off ties with family to focus exclusively on a new circle of friends, insistently preaching to others to adopt certain beliefs, making derogatory and hateful remarks against non-Muslims or Muslims who do not share similar views, and legitimising the use of violence to defend an ideology.

"Extremist groups try to recruit ordinary Muslims through their dangerous and misguided ideologies through the Internet," the guide says. "It is therefore important to be vigilant and protect our family members against the threat of radicalisation."