In boost to Republic's air hub status, Aussie carrier will re-route service to operate via S'pore instead of Dubai

After ditching Singapore for Dubai as a stopover for its Australia-Europe flights, the Flying Kangaroo will return to Changi Airport in March next year - five years after its exit.

In a significant boost to Singapore's air hub status, Australia's Qantas said yesterday that from March 25, it will, once again, operate its daily Sydney-London service via Singapore.

Since April 2013, the airline has been operating its Sydney-London and Melbourne-London services via Dubai, as part of a 10-year commercial alliance with Dubai's national carrier, Emirates. Before that, both flights stopped in Singapore first.

With the recent announcement, the flight from Sydney will be re-routed to operate via Singapore. A new Melbourne-Perth-London service will be launched.

From next March, Qantas will also increase the number of Melbourne-Singapore flights from 10 to 14 a week and operate the service with the bigger A-380 instead of the current A-330.

The changes will mean an additional 3,806 one-way seats - a 5.5 per cent increase - on Singapore- Australia routes every week. 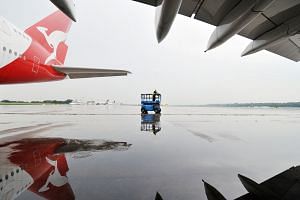 Capacity on Singapore-Britain routes will increase by 18.3 per cent, or an extra 3,388 one-way seats a week.

The changes are part of plans to shift capacity to a fast-growing Asia market, Qantas' chief executive officer Alan Joyce told The Straits Times in a telephone interview after the airline announced its future plans.

"Customers in Singapore will have a greater choice of services, aircraft and cabins, with first and premium economy available on the A-380 between Singapore and London as well as on the Singapore-Sydney and Singapore-Melbourne services," he said.

When asked if customers had asked for a return to Singapore as a stopover for flights to Europe, Mr Joyce was diplomatic, saying: "Some of them like to stop in Perth, some in Singapore and some in Dubai. This (the changes) gives the customer more choice."

He added, though, that there are no plans for Qantas to resume Melbourne-London flights via Singapore.

As for whether the Sydney-Singapore-London service is meant to be an interim measure - while Qantas waits for Airbus or Boeing to build a plane that can allow it to operate the flight to London non-stop - Mr Joyce said that he cannot rule out anything. He also denied that the decision to shift out of Dubai was due to recent security concerns in the Middle East, which some analysts have suggested.

Welcoming Qantas' decision to make a comeback, Changi Airport Group's managing director for air hub development Lim Ching Kiat said: "This development secures Changi Airport as the most connected international airport to Australia, in terms of the number of both city links and seats, and strengthens our position as the region's leading air hub.

"We look forward to continue working with Qantas to explore new opportunities to boost its business and operations at Changi."

Australia is among Changi Airport's top five country markets in terms of passenger traffic, with more than 5.5 million passengers travelling between Singapore and Australia annually.

For the first seven months of this year, passenger traffic between the two countries rose 3.6 per cent year on year to 3.3 million. During this period, Sydney and Melbourne were Changi's 10th and 11th busiest routes respectively.

Aviation analyst Shukor Yusof of Endau Analytics said: "Qantas' decision more or less underscores what some of us have observed in recent years: that Dubai and, to some extent, Emirates are mirages.

"Changi offers more stability and less uncertainty, as well as great connectivity choice for passengers. Australia is more dependent on Asia than it is on the Middle East."

A version of this article appeared in the print edition of The Straits Times on September 01, 2017, with the headline 'Qantas to return to Changi for Sydney-London flights'. Subscribe
Topics:
More
Whatsapp Linkedin FB Messenger Telegram Reddit WeChat Pinterest Print Purchase Article Copy permalink