Singapore's biggest employer plans to slash its consumption of electricity and water as part of a nationwide "go green" plan unveiled yesterday.

By 2020, the public sector will use 15 per cent less electricity and 5 per cent less water compared with 2013 levels, according to the Public Sector Sustainability Plan 2017-2020 announced by Deputy Prime Minister Teo Chee Hean.

As part of this, the temperature setting for thermostats in air-conditioned public-sector offices will be set higher, Mr Teo said.

Such steps could save about $62.5 million a year, apart from being gentler on the environment.

For a start, premises will be greener. All new public-sector buildings will attain the highest Green Mark Platinum standard, and existing buildings will aim for at least the Green Mark Gold standard - to take their place in the certification scheme for environmentally friendly buildings.

Events and functions will be held in venues with at least a Green Mark Certified rating - the basic certification grade.

The public sector will also buy more green electronics and paper products for its offices. Food waste will be recycled in public-sector premises and a floating solar test-bed will be set up in Tengeh Reservoir. The sector will also continue to invest in green technologies and seek innovative ways to harness renewable energy.

"This will help transform the way the public sector operates and set an example for the wider community to adopt sustainability as our way of life," added Mr Teo, who is also the Coordinating Minister for National Security.

The public sector is Singapore's largest employer, comprising 16 ministries and 64 statutory boards, and about 145,000 officers. 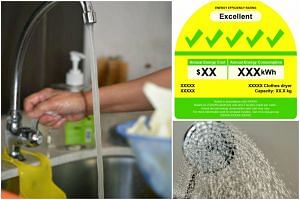 Public sector to cut water, electricity usage: Tips to save water, energy and money at home

From 2013 to 2015, the sector accounted for an average of 4 per cent of Singapore's total electricity consumption and 3 per cent of total water consumption.

Under the Paris Agreement, Singapore has committed to reduce emissions intensity by 36 per cent from 2005 levels by 2030, hoping to peak around then.

"To achieve our objectives, we will require a concerted effort - from government, from businesses and from everyone in Singapore," Mr Teo said at the official opening of the Singapore Sustainability Academy, a major training and networking facility focused on promoting sustainability.

The zero-energy academy - it will produce its own power using solar panels - is located on the rooftop terrace of City Square Mall in Kitchener Road, and was jointly created by developer City Developments and a non-profit organisation, the Sustainable Energy Association of Singapore.

"One major driver behind this is the growing number of discerning consumers who are choosing which product to buy and which company to support based on their ethical and environmental cultures," said a spokesman.

"As ethical green consumerism grows in Singapore, it will increasingly make good business sense for companies to act sustainably."

The plan was one of several green initiatives announced yesterday. These include the launch of an eco-label to help consumers identify products with reduced packaging. Singapore Post and Singtel have also started a nationwide recycling programme for unwanted electronics.

SEE TOP OF THE NEWS, BUSINESS: