S'poreans appreciate their $6m charity gift, while long-time friends speak fondly of them

Public response to a couple's posthumous donation of $6 million to various charities in Singapore has been overwhelming, with many Singaporeans taking to Facebook to express how touched they are.

Mr Zaini Rahamat, who works at The Tanglin Club in Stevens Road, said the couple - Mr Gerry Essery and Mrs Jo Essery - were even nicer in person. Mrs Essery was 89 when she died in 2013, and Mr Essery was 92 when he died in 2015.

Mrs Essery, a bubbly cat-lover, spoke to him in fluent Malay, calling him "Encik Zaini" even though she was older.

"She never spoke English to me. She spoke Malay just like how Malay people, Melayu asli, spoke it," said Mr Zaini, 63, who is now the club's relationship manager. Mr Zaini said he had known the couple, who first became members of the club in 1963, from the time he joined the club as a waiter in the 1970s.

Even in their later years, the housewife and retired accountant would visit the club every day, sharing a bowl of traditional chicken curry for lunch at the Tavern before heading to the library upstairs. Then, walking hand in hand, they would return to their house in Jalan Lada Puteh, behind Lucky Plaza.

The couple had left behind the legacy donation, announced last Thursday, to be divided equally among the Assisi Hospice, National Kidney Foundation and the Society for the Prevention of Cruelty to Animals (SPCA). The $2 million donation is the largest cash donation the SPCA has received. 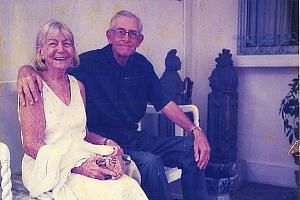 The loving couple were "inseparable", said Dr Tan, who is the founder of the Mount Pleasant group of animal clinics and also the executor of the couple's estate.

The Esserys moved to Australia in the 1950s, where Mr Essery worked for multinational confectionery company Cadbury.

The couple decided to make Singapore their home after Mr Essery landed a job at Singapore Glass in the 1960s. They became citizens in the 1970s.

Dr Tan, 72, first met her at the government-run Animal Infirmary in Kampong Java in the 1970s, where he was serving out a bond for the Colombo Plan scholarship that had funded his studies in Glasgow.

The young veterinarian and Mrs Essery, who was on the management committee of the SPCA for more than four years, bonded over their love for animals.

"It was unusual for a local to be so involved with animals," he said of himself. "Committee members at the SPCA were largely expats."

Mrs Essery was actively involved in social causes and had also worked with underprivileged girls, receiving the Public Service Star for her work in social welfare and appearing on the National Day honours list in 1971.

The Esserys led comfortable lives, frequenting restaurants such as Culina in Dempsey Road, and often went abroad for holidays.

But they were very prudent and low-key, said Dr Tan. He added that he had no idea how well-off the Esserys were until discovering the terms of their wills, laughing as he recalled how he had tried to give them financial advice in the past.

Mr Essery was a wine connoisseur, and around the 1980s started wine appreciation dinners in The Tanglin Club. Mrs Essery, an avid collector of trinkets, loved to visit the Sungei Road flea market.

She died in 2013 as she was napping with her husband on the sofa at home. Mr Essery was lucid until his death in 2015, maintaining a keen interest in current affairs.

Long-time friend Jane Prior, who knew the couple for about 30 years, remembers how the couple had "generous personalities". "They were generous with what they knew, in telling stories," she said.

Mr Essery, feeling lonely after his wife died, was often spotted at their old table at the Tavern, dining alone.

Said Mr Zaini: "They were a very loving couple. Wherever they went, they went together, holding hands.

"You never saw them getting angry. They were the most humble people I had ever met."