He had appealed against $25k fine for making false representation to patient, failing to offer surgery

Prominent cancer specialist Ang Peng Tiam of Parkway Cancer Centre, who had appealed to the Supreme Court against a Singapore Medical Council (SMC) conviction and fine of $25,000, has been given an eight-month suspension instead.

It would have been a 16-month suspension had the SMC acted on the complaint more expeditiously, said Chief Justice Sundaresh Menon, who delivered the Court of Three Judges' decision on Tuesday.

Two daughters of a patient made a complaint against Dr Ang in December 2010, shortly after the patient, aged 55, died of lung cancer that had spread to other parts of her body, including her brain, liver and pancreas.

Dr Ang was given notice of the inquiry only in April 2015.

In July last year, the SMC's disciplinary tribunal found him guilty of two of the four charges levelled against him: that he had made false representation to the patient that there was a "70 per cent" chance of her lung cancer responding to the treatment he suggested, and that he failed to offer her surgery as an option.

The tribunal said Dr Ang "had no reasonable basis" for saying there was a 70 per cent chance of response and that he had "wrongly held out false hope" to the patient and her family. 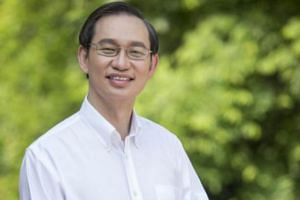 Timeline of interaction between Dr Ang Peng Tiam and the patient

It also found him guilty of not offering surgery when that was "the preferred initial treatment option". Dr Ang had admitted to the tribunal that surgery was the "only" prospect of cure and that the patient might have up to a 20 per cent chance of being cured with surgery.

A statement from the SMC yesterday said the tribunal found that there was an "intentional, deliberate departure from standards observed or approved by members of the profession of good repute and competency".

The tribunal felt that while his actions "merit severe penalty", it decided against a suspension, given the testimonials in favour of Dr Ang as well as his community work.

Instead, it imposed a fine of $25,000, a censure and an undertaking not to repeat the offence, and ordered him to pay 60 per cent of the cost of the proceedings.

The SMC had also appealed against the tribunal's decision and urged a six-month suspension for each of the two offences for which Dr Ang had been found guilty.

Dr Ang, who was Prime Minister Lee Hsien Loong's principal doctor in 1992 when he was treated for lymphoma, appealed against the tribunal's conviction and penalty. In his defence against the original complaint, he provided details of his experience, including how he had seen about 16,000 new patients over the past 16 years, of whom 10 per cent to 15 per cent suffered from lung cancer.

Instead of taking his "eminence and seniority" as mitigating factors, the court saw them as "aggravating" factors, and said Dr Ang's "unblemished record" of more than 30 years had limited relevance in mitigation.

But it took into account the 4½ years it took the SMC to serve notice of inquiry on Dr Ang after receiving the complaint. This "inordinate delay" caused suffering to Dr Ang.

Chief Justice Menon said the appropriate sentence, given the seriousness of the offence, would have been a suspension of 16 months for the two charges. But given the long delay by the SMC, the court halved the sentence to an aggregate of eight months.

Yesterday, TalkMed Group, whose chief executive officer is Dr Ang and which runs Parkway Cancer Centre, informed the Singapore Exchange of the judgment.

It expressed disappointment with the verdict, but gave the assurance that Dr Ang's patients would be well taken care of by Dr Khoo Kei Siong, the company's chief operating officer, during Dr Ang's suspension.

While Dr Ang will not be involved in patient care, it said he will "continue to lead the group and develop other growth opportunities".