Prices at top hotels near $2,000 per table before taxes, extras; rates rising 5-10% yearly

Wedding banquet prices at top hotels are on the verge of hitting the unprecedented $2,000-mark for each table of 10, with several newlyweds already forking out more after additions such as menu upgrades and alcohol.

And that is before the addition of the Goods and Services Tax.

Luxury hotels Capella Singapore and St Regis lead the pack with a quote of $1,988 for a table on a Saturday night, often the most expensive session. Ritz-Carlton Millenia came in close at $1,878, while others like Shangri-La and InterContinental charge $1,688 and $1,588 respectively.

Inflation, escalating food costs, and a tightening labour market have been steadily pushing prices up by about 5 to 10 per cent annually, with industry watchers saying there has yet to be a dip in recent years. The average hotel table price went past $1,000 in 2008, before taxes.

Ms Caroline Tan-Reed, who co-founded The Wedding Stylist in 2009, said of the steady rise in banquet costs: "We have never seen table prices go down." 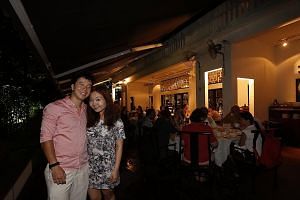 More saying 'I do' to cosy restaurants, green settings 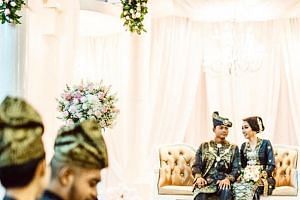 But several hotels, including St Regis, Grand Hyatt and Shangri-La, said they would not be revising their rates between now and 2017. Asked why, Hyatt's director of events Raymond Tan said it was "to celebrate our dedication to the local market".

The Julius Baer Lifestyle Index, which compares the price of luxury items and services across Asia, put Singapore as the region's sixth priciest place to tie the knot last year (see table). The annual survey compares the cost of a wedding banquet for 500 at a top hotel across 11 Asian cities. Last year, this was more than $112,000 for a hotel in Singapore - about $27,000 more than it cost in 2011 - a rise of around 30 per cent.

Many hotels, however, insist they give bang for the buck. St Regis' $1,988 per table package includes a two-night hotel suite stay for the newlyweds and a personalised wedding cake. Grand Hyatt charges $1,788 a table for the regular menu, but this includes whole abalone.

For $1,748, W Singapore Sentosa Cove offers a full marina view from the ballroom and allows guests to arrive on private yachts.

Couples themselves may have a part to play in driving up prices, according to wedding planners.

Ms Tan Weiwei, founder of Chere Weddings & Parties, said newlyweds these days have higher spending power. "They are getting married at a later age and have higher expectations from hotels in terms of quality and service."

The latest General Household Survey, released on Thursday, also showed that Singapore residents were marrying later, with 70 per cent of those in their mid- to late- 20s staying single - a sharp rise from 50 per cent about 15 years ago.

For others, hotel wedding banquets are a must to fulfil social expectations, especially if their families expect them to invite all their relatives and business associates.

Said Ms Leana Doray, founder of web portal The Wedding Scoop: "Typically, hotels are the only venues that can accommodate a large number of guests."

Given the rising costs of hosting a wedding banquet, guests should also be prepared to gift a little more. Wedding planners recommend between $150 and $200 each.

Still, Ms Michelle Tay, editor of online wedding resource Singapore Brides, believes marrying couples should not rely just on red packets to recoup costs, as one cannot control how much guests will give. She said: "Budget for a potential loss. Anything more will be a bonus."

CIMB economist Song Seng Wun believes nothing short of a full-blown recession will bring table prices down. "There are certain things in life for which prices are inelastic," he said. "Healthcare, funeral packages... and in between, weddings. My advice to couples getting married today? Do it in Johor."

Other cost-cutting measures include a weekday banquet or having a lunch reception instead.

Brokers Janice Sim and Luke Cheong, both in their 30s, chose to have a wedding lunch at Capella last December, as they estimated dinner would have cost them around $300 more per table after taxes.

The party for 310 guests cost $100,000. Red packets covered 70 per cent. "It was a costly affair," said Ms Sim, but added that Capella had always been her dream wedding venue.

Commodities trading firm treasurer Stacey Su, who tied the knot on March 5 with 30-year-old software engineer Lee Qianwen, celebrated their wedding at W Singapore Sentosa Cove. After a menu upgrade, they spent more than $200 on each of their 340 guests.

The 29-year-old admits the cost initially stunned her, but she was determined not to think about it.

She said. "I just wanted to have a good, memorable time with my friends and family, and not worry about counting every single cent."

Top hotels, top prices
How much should you put in your red packet?