SINGAPORE - Sitting snugly with his friends on a picnic mat at the Istana, Yong Sheng Han, 10, gazed intently at the picture book in front of him, trying to take in all the drawings and colours, while listening to the storyteller, President Halimah Yacob.

Of his first time visiting the Istana and meeting the President, Sheng Han said: "I was excited and happy to meet Madam Halimah. I was also nervous because it was my first time shaking her hand." The Primary 4 pupil attends Pei Tong Primary School.

He was one of 43 children aged between five and 10 who were treated to a special storytelling session by Madam Halimah, in the first Picnic @ Istana event of the year on Tuesday (April 9).

The children are beneficiaries of Shine Children and Youth Services, which serves underprivileged children with learning and socio-emotional difficulties. Most of the children invited have learning difficulties such as global developmental delay and some are diagnosed with autism and dyslexia.

Madam Halimah also interacted with the children's parents, and staff and volunteers of Shine.

For the storytelling session, the President chose the picture book Shrinking Sam, written by UK-based author and illustrator, Miriam Latimer.

In the tale, the main character finds himself shrinking as he goes about his day, feeling ignored and dismissed by his friends and family. The story emphasises the importance of showing care and concern to children at home, and also reminds children to be kind to one another, said an Istana spokesman.

Madam Halimah chose to focus on the importance of reading for this picnic because the 43 children did not get the chance to pick up reading habits earlier as they come from underprivileged backgrounds.

The children, who are a few years behind their peers at school and kindergarten in literacy skills, have also been attending a weekly guided session called Reading Odyssey to develop their reading skills at 12 places islandwide such as the Shine centres in Clementi, Hougang and Yishun, and Clementi Community Centre. 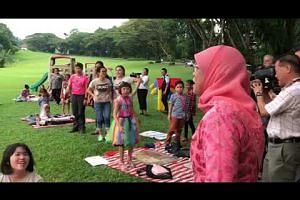 Madam Halimah said developing literacy skills in children before they reach Primary 1 is crucial because that serves as a foundation for their academic journey.

In a nod to the Reading Odyssey programme, Madam Halimah told reporters: "We must always look at how to create opportunities because not all children come from English-speaking backgrounds, nor do they come from backgrounds where their parents are there all the time to be able to give them the kind of support for them to develop their reading skills.''

But more can be done, she added, as there could still be groups that are underserved, particularly those whose parents are unable to take them to centres for the reading programmes. These may need more targeted reading programmes, she said.

Sheng Han's mother, Ms Alice Ng, 49, said he can now read full sentences and spell more words through the Reading Odyssey programme. When he started attending the programme two years ago, "he couldn't read at all".

Sheng Han visits the Clementi Public Library twice a week, and is fond of The Young Scientists magazines and books about dinosaurs, added Ms Ng, a housewife.

This was the fifth in the Picnic @ Istana series, which started in 2017 after Madam Halimah took office.

For the previous four events, she invited beneficiaries from organisations such as the Dyslexia Association of Singapore, Rainbow Centre and Care Community Services, who, among other things, did paintings and celebrated the Mid-Autumn festival on the Istana grounds.

Since it is one of Madam Halimah's priorities to make the Istana more accessible to Singaporeans, she has invited various groups to the heritage site under the Picnic @ Istana and Garden Tours @ Istana programmes.

Before her presidency, the Istana was open to the public only during Chinese New Year, Hari Raya Aidilifitri, Deepavali, Labour Day and National Day.