History was made at a quarter past six yesterday evening, with the inauguration of Singapore's first Malay President after 47 years, and its first woman head of state.

Her rise to the highest office of the land reaffirms Mr Lee Kuan Yew's vow in the very early hours of independence on Aug 9, 1965, that Singapore "would not be a Malay nation, a Chinese nation nor an Indian nation", PM Lee said in an address to 200 guests.

When this pledge was made, the nation had a Malay head of state: Encik Yusof Ishak, who died in his third term in 1970, at the age of 60.

"President Yusof Ishak symbolised, visibly, that though we had been forced out of Malaysia primarily because we were a Chinese-majority city, independent Singapore would never in turn suppress its own non-Chinese minorities. We chose the nobler dream: A multiracial, multi-religious Singapore."

"Madam President, half a century later, you symbolise, visibly, that Singapore will persevere with this dream," PM Lee said, adding that this has become more urgent in the light of regional and global trends. 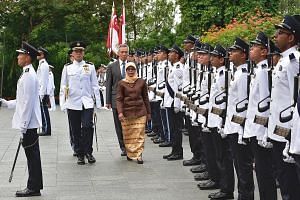 "In an age when ethnic nationalism is rising, extremist terrorism sows distrust and fear, and exclusivist ideologies deepen communal and religious fault lines, here in Singapore, we will resist this tide.

"Here, the majority will make extra efforts to ensure that minorities enjoy equal rights. That is something special, precious and fragile."

I look forward to the day when we will no longer need to rely on the provision to have reserved elections, and Singaporeans naturally and regularly elect citizens of all races as presidents. ''

PRESIDENT HALIMAH YACOB, saying she respected the views of Singaporeans who prefer not to have reserved elections.

This was the "compelling reason" the Government amended the Constitution to reserve the presidency for a community that has not held the post for five terms, he added.

"I am proud that I belong to a country that does not just say it is diverse, but lives out this diversity every single day," she said, adding that while strides have been made, it remains a constant work in progress.

"We need guideposts to help us along this journey," she added, as she addressed the palpable disquiet of the past week over her walkover in the first reserved election.

"I know that some Singaporeans would prefer to achieve this without needing reserved elections. I respect their views," she said.

"Like them, I look forward to the day when we will no longer need to rely on the provision to have reserved elections, and Singaporeans naturally and regularly elect citizens of all races as presidents."

"Today, I want to assure all Singaporeans that as your President, I will serve every one of you, regardless of race, language or religion."

PM Lee noted that the life story of the veteran unionist and former Parliament Speaker reflects the Singapore Story.

Madam Halimah said her life story is a testament to Singapore's meritocracy, a shared value the presidency embodies, together with multiracialism and stewardship.

"I have seen how much we can achieve by working together. Now, as President, my duty is to unite the people, to overcome the many challenges ahead of us, together.

"I pledge to continue this journey of service to our country. I call on all Singaporeans to join me in this endeavour," she added.

SEE TOP OF THE NEWS, OPINION