SINGAPORE - More than 100 bargain-hunting shoppers queued early outside Robinsons The Heeren on Friday (Nov 29) for the Black Friday sale.

That's more than double the number of people who had parked themselves there at 4pm the day before, armed with sleeping bags, tables and foldable chairs.

The Robinsons' Black Friday sale, called The Great Blackout, runs from 7am on Friday to 1am on Saturday at the department store's outlets in Jem, Raffles City and The Heeren.

The prize for the most dedicated shopper must surely go to 29-year-old financial adviser Mr Tan, who started queueing at the ungodly hour of 4am on Thursday, leaving him with a 27-hour endurance test.

At least Mr Tan, who declined to disclose his first name, has the consolation of being first in line.

He is getting married soon and has his sights set on a new mattress and some home appliances such as a rice cooker and vacuum cleaner for his new home.

The items would cost at least $8,000 in total in the sale, making him eligible for a free iPhone 11 Pro Max. Robinsons is giving away the phone to customers who spend a minimum of $8,000. There are limited phones available and they will be given out on a first come, first served basis.

He said: "Since I'm spending that amount of money already, so the iPhone can offset the cost of things I'm buying."

Ms Yan, who declined to give her first name, is another shopper ready to put in the hours on the pavement.

She joined the line at the store for the sale last year and this time round, came prepared with extra portable battery chargers for her phone as well as jackets in case it gets cold.

Ms Yan, 29, who is unemployed, started queueing at 11am. She plans to buy make-up and skincare products.

"This year we have to queue longer because it starts at 7am and not midnight, but I'm not deterred. All the brands that are inside, I would buy," she added.

The annual sale, which started in the United States, has been gaining traction in Singapore over the past five years. It is traditionally held on the Friday after Thanksgiving and so named because stores would make enough money to keep them in the black.

Major local retailers such as Robinsons, Courts, Tangs and Metro have jumped on board in recent years, offering discounts as high as 90 per cent for some products.

Retailers who participate in the sale said they have consistently received good feedback from customers.

Courts first joined in the sale in 2013, when it offered discounts through its online site. But due to rising interest in recent years, Courts expanded the sale to its physical stores in 2016.

For the first time this year, the retailer is also running continuous flash sales on its online platform all the way from today till next Monday, refreshing limited-time star buys every six hours.

Department store Metro has teamed up with online marketplace Lazada for the sale, offering up to 90 per cent off for a variety of products on their website.

Said Metro chief executive officer David Tang: “We hope to tap Lazada’s technology and ecosystem as a gateway to redefine shopping experiences for our customers.”

At Robinsons, the first 300 customers in line will get a Black Friday survival kit containing supplies such as a snack and a drink. 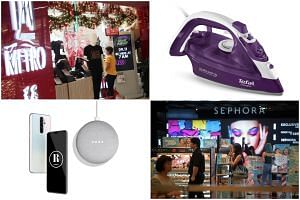 'Tis the season for online shopping

Those waiting in line can also expect some entertainment at various hours, including a magic act.

Robinsons senior general manager Danny Lim said: “We hope that customers will be delighted with their purchases and continue shopping with Robinsons.”

Data from property consultancy CBRE shows that malls in Orchard Road saw footfall increase by more than 25 per cent on Black Friday last year compared with 2017.

These malls also recorded anywhere between 28 and 46 per cent higher footfall on Black Friday than their weekend and daily averages.

Mr Arpan Barua, senior director (occupier consulting) at CBRE, said that while footfall does not necessarily translate to sales, it is evident that consumers here still patronise physical stores.

He said: "On Black Friday in particular, it is likely that the sales rate is even higher, with shoppers often having a target shopping list, or bargain-hunters ready to make a purchase if they see a good deal."

The data also showed that shoppers are more willing to shop later into the night on Black Friday compared with other Fridays during the year.

Mr Barua said: "This may be a hint that it is worth retailers' consideration on extending their operating hours on Black Friday to slightly later into the evening."

“Retailers are continuously looking for ways to lure shoppers back to the store and major annual sales days, such as Black Friday, is one way to do that,” he added.

“Having these sales events is a good thing for consumers, as they offer them more choices at better prices. Consumers like you and me will continue to look forward to these key sales events every year.”