SINGAPORE - A six-month pregnant woman was crossing the road with her mother-in-law on Saturday (May 13) morning when she was hit by a lorry turning out from a carpark.

Ms Goh Chieh Ting, 25, was sent to the hospital, where she was later pronounced dead. But her premature daughter was saved when doctors performed an emergency caesarean on her.

"The baby is healthy, and large for her age," said Madam Yau Siew Mek, 64, who is her grandaunt.

While Madam Yau has not seen the infant personally, she added: "Family members have been to see the baby, and have told her to be strong."

Ms Goh had been holding hands with her mother-in-law, on their way to the market after breakfast, when the accident took place at 8am on Jurong West Avenue 1, near Block 456.

As they were crossing the road, a lorry drove out from a carpark and turned right. Even though the driver slammed on the brakes, he was unable to stop the vehicle in time and hit Ms Goh.

"She's been crying non-stop since the incident," Madam Yau said of the mother-in-law, who lived with Ms Goh and doted on her.

Ms Goh was taken unconscious to Ng Teng Fong General Hospital, where she died at 9.30am on the same day due to severe head injuries.

A 46-year-old male driver has since been arrested for causing death by negligence.

"The baby is still in hospital and under observation, but we are not sure when she will be out or who will care for her," added Madam Yau, who broke down when she found out about the accident. 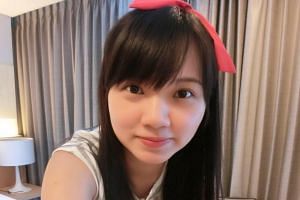 On Sunday evening, close to 100 members of Ms Goh's friends and relatives turned up at her wake in Jurong West to pay their respects.

Her immediate family, including her mother and husband, declined to comment about the incident, only saying that the baby girl is in "stable condition".

One of her cousins, who declined to be named, said: "We are thankful for the doctors at Ng Teng Fong Hospital for making the quick decision to save the baby."

An aunt, who last saw Ms Goh in Johor Baru when they were visiting relatives during Chinese New Year, added that "she had been a very filial and obedient child", before she was overcome by grief and unable to continue speaking.

"She was always very friendly, approachable, and bubbly," said Mr James Liaw, 36, who is Ms Goh's uncle. "Things are not going to be the same without her around."