They rated their confidence levels 2.73 to 3.17 out of five, for dealing with different types of suspected child abuse cases. On what they should do when a child "discloses abuse", the average score was 4.35 out of eight, barely a pass.

And when asked if they were aware of a guide that helps them know which scenarios should be reported - a manual available online to the public - more than 70 per cent of the respondents said no.

These are some of the findings from a recent survey by the Singapore Children's Society (SCS).

In May, it polled 336 pre-school professionals.

Respondents who had training in child protection in the course of their careers scored better than those who were trained before they started work. Pre-school teachers were also four times more likely than pre-school leaders to know that their centre has a standard procedure for dealing with suspected child abuse cases.

"It might be that the standard operating procedures for (teachers) are more straightforward. If there is a concern, they would report directly to the centre leader. But for centre leaders, matters may not be as clear-cut," said an SCS spokesman. 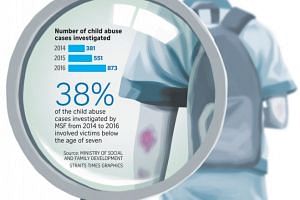 Nearly 40% of children in abuse cases under age seven

Centre heads have to decide if the cases are severe, and whether to flag them to parents or to report to the Ministry of Social and Family Development (MSF).

But the official guide by the ministry could also give rise to some confusion: For instance, it advises different action to be taken for persistent cane marks over time. Cases that "may" warrant immediate reporting include a child who "verbalises or demonstrates extreme fear to return home" or has a "specific suicide plan".

SCS chief executive Alfred Tan said that while its survey is not a rigorous research study and may not be representative of all pre-school educators, the findings are in line with its observations from working with the educators.

Since 2011, SCS has run a one- hour sexual abuse prevention programme called KidzLive for children in pre-schools. It also started running a full-day course for pre- school educators this year.

A version of this article appeared in the print edition of The Straits Times on September 19, 2017, with the headline 'Pre-school teachers 'not sure how to handle cases''. Subscribe
Topics:
More
Whatsapp Linkedin FB Messenger Telegram Reddit WeChat Pinterest Print Purchase Article Copy permalink