Set up by the Islamic Religious Council of Singapore (Muis), the programme will equip Singaporean students with the relevant knowledge and skills to serve in both the religious and secular sectors, while being grounded in Islamic teachings and values.

The Postgraduate Certificate in Islam in Contemporary Societies (PCICS) is a one-year full-time programme that aims to help returning religious graduates readjust and contextualise what they have learnt overseas to local social and political contexts.

The course is especially relevant for aspiring Islamic leaders in Singapore, also known as asatizah.

Religious graduates hoping to serve as an asatizah in Singapore will be required to hold the PCICS, as it is now part of the requirements for registration under Tier 1 of the Asatizah Recognition Scheme in Singapore.

The programme was introduced yesterday by Minister-in-charge of Muslim Affairs Masagos Zulkifli at the inaugural Workshop on Islamic Higher Education organised by Muis at the Royal Plaza on Scotts.

"When our graduates return to Singapore, they are coming from contexts where Muslims are the majority, and Islam is taught to them for that context," he said.

"Our special context in Singapore is that we are the minority. There is a need for our returning graduates to be reoriented to how and what is effective for our society in Singapore, not just for the Muslims, but also for us to live with the rest of Singaporeans." 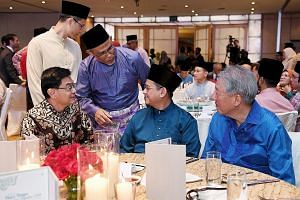 Muslim Singaporeans have much to be proud of: Masagos

Muslims in Singapore a model for those in other countries: Masagos

No date has been confirmed for the launch of the Islamic college.

Students on the PCICS will read a selection of modules offered by the Muis Academy and by local and foreign universities.

Modules selected in the PCICS programme will cover a range of social sciences, vocational skills as well as Islamic studies so that students gain a "more rounded education", Mr Masagos said.

Potential modules could include Islam In Singapore, Understanding Our Social World, Religion In Contemporary Societies, as well as introductory modules on counselling, social work and psychology.

PCICS students will also have opportunities to take up internships, projects and workshops so that they can develop on-the-job work-ready skills for their future roles in religious and secular sectors.

Foreign universities Al-Azhar University from Egypt and the University of Jordan will share their expertise in teaching traditional Islamic studies and Arabic.

Enrolment begins in January, and the programme will be offered from April next year.