Mr Tan Chee Wee, 42, might have been a policeman if he had not chosen to be a teacher.

He had reservations about joining the Singapore Police Force (SPF) because he was not deemed fit enough for a combat vocation during his national service.

He found a win-win solution as a Volunteer Special Constabulary (VSC) officer, which he signed up for in 2002 when studying at the National Institute of Education.

Since then, the Hwa Chong Institution teacher has served at Jurong West Neighbourhood Police Centre (NPC) before being transferred to Choa Chu Kang NPC last year.

The VSC was formed after World War II, in 1946, to assist regular police officers. VSC officers are vested with the powers of a police officer, including those of arrest.

He finds it meaningful to be a VSC officer as it allows him to engage with the community, such as mediating in domestic disputes.

The mathematics teacher is the principal consultant for student development in school. He is also involved in two co-curricular activities - National Police Cadet Corps and Scouts.

He is among those taking part in the Police Bicentennial (SPF200) Run, the first in a series of events marking SPF's 200th anniversary.

Starting on Friday, the run saw police officers completing a total relay distance of 200km in 24 hours, while passing through the sites of 30 past and present SPF establishments across Singapore. 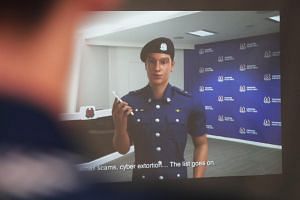 Meet the police force's latest recruit: Inspector Clif, who is friendly and with a dash of humour

At 98, he is Singapore's oldest surviving retired cop

The final leg was flagged off by President Halimah Yacob yesterday at Marina Barrage, with over 3,200 SPF officers and their family members taking part.

The run was followed by the official launch of SPF200 by Madam Halimah at OCBC Square, Singapore Sports Hub. A set of six stamps commemorating SPF's bicentennial was also unveiled.

In her speech at the event, Madam Halimah acknowledged the essential role the SPF plays in protecting Singapore against threats such as terrorism and cybercrime, and the importance of a strong police-community partnership.

She expressed her appreciation to family members of the officers. "The life of a police officer is one of late nights, sudden activations and long hours away from home. Thank you for the love, understanding and support you have shown to our officers through the years," she said.

Sisters Winnie and Eunice Loke, who are both serving in the SPF, also took part in the run.

Winnie, 33, joined the SPF as a civilian officer in 2013 and is now with its Public Affairs Department.

Eunice, 29, a senior investigation officer in the Commercial Affairs Department, has been with the SPF since 2014.

Despite their busy schedules, the sisters remain close. "Sometimes we do not see each other for days, but we still text," Eunice said. "We also go on short trips together."

The sisters said their parents have no issues with both of them being in the SPF.

Mr Tan's parents were also very supportive when he first told them he had volunteered as a VSC officer.

He said he would remain a volunteer for as long as he could and was thrilled to be taking part in the SPF200 Run. "I think it is great that the SPF includes the VSC in all its events. I feel like I am part of a larger family," he added.