SINGAPORE - Partygoers enjoying the fireworks display this New Year's Eve at Marina Bay may catch a glimpse of a police drone in the sky, which is part of the beefed-up police presence for the event.

About 700 police officers will be deployed for this year's Marina Bay Singapore Countdown. They include officers from the Special Operations Command, Protective Security Command, Public Transport Security Command and Emergency Response Teams, the police said on Thursday (Dec 27).

The event includes light projection shows at the ArtScience Museum and the Merlion. Doors for the concert at The Promontory are open from 7pm with the pre-show starting at 9.30pm.

But this year, the force is using technology in the form of a specialised drone to enhance the safety and security of the thousands who are expected to attend the festivities.

The unmanned aerial vehicle (UAV) features blinkers, searchlights and an audio warning system. It was trialled at the last countdown and other major events but will be deployed officially this year.

"UAVs have been very effective because of the view they provide," said DAC Tan. 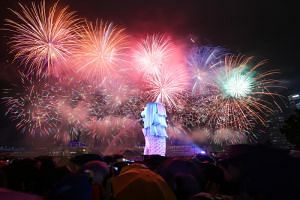 Send in the drones: How tech can give police ops a lift

"Over and above closed-circuit television cameras, officers' perspectives and cameras worn by officers, the UAVs allow a higher plane view of the events and that's very useful for crowd control operations."

"We are able to react more quickly to manage the crowd and ensure that public safety is prioritised and citizens can enjoy the countdown safely," he said.

He added that the public should remain vigilant amid the revelry as the terrorist threat remains, and to look out for suspicious people and objects.

During the festivities, security personnel may conduct checks on bags and personal items. Partygoers should also be vigilant against molesters, the police said, and the public should not engage in activities that may compromise the safety of others, such as flying drones in the vicinity of the New Year events.

In addition to boots on the ground and a drone in the sky, more than 20km of fences and barricades will line the Marina Bay area for crowd control measures.

The police are also using more concrete blocks, about 900 tonnes in total, to line the roads as a measure against vehicle attacks.

In a first for the countdown, speakers that will be used for public announcements will also play soothing instrumental music during crowd dispersal.

Police officers and their auxiliary counterparts will also be regulating the number of people entering The Promontory, One Fullerton/Merlion Park, Esplanade Park, Esplanade Waterfront Promenade, Marina Bay Sands Promenade and other areas in the vicinity of Marina Bay.

There will also be road closures in the area such as Marina Boulevard and Raffles Avenue, and the police Facebook page will be updated regularly on the crowd situation to prevent overcrowding and allow partygoers to plan their journey.

Mr Ravi Sivalingam, head of operational support services at the Esplanade, expects around 70,000 people to visit the area during the countdown activities.

He added that the Esplanade, which is working closely with the authorities, started security preparations about three months ago.

While he was unable to share details of the security measures being taken, Mr Sivalingam said: "Our security operations are ultimately for everyone's safety.

"So should people be told to take a longer route (because of road closures and crowd control measures) I hope they remember that it's for the greater good."