National water agency PUB has reunited the two orphaned brothers Din and Zul in a poignant ending to its Hari Raya Aidilfitri short film that first captivated viewers in May.

In a Facebook post on Tuesday, PUB released the ending in the form of a five-minute audio story titled Dear Din, From Zul, crafted by its creative team in collaboration with members of the public.

The story captures Zul reading a series of letters to Din, telling his side of the story after the brothers were separated on the morning of Hari Raya many years ago. While they reunite in the end, they face a trying situation.

PUB last month called for ideas on the ending of its festive short film Kinship, which was released on May 30, ahead of Hari Raya Aidilfitri on June 5.

It tells the story of two brothers who grew up in an orphanage in the 1960s but fell out after older brother Din learnt he would be adopted. Its message of mending relationships and family ties, which is central to the spirit of Hari Raya Aidilfitri, left viewers teary-eyed, with many hoping for a sequel that would see the brothers reunite after the film ended with a cliffhanger.

PUB said that within a week, it received more than 200 submissions through Facebook comments and e-mails.

In a statement on Tuesday, PUB said three selected people participated in a workshop on July 9 with the minds behind Kinship, including PUB staff, creative agency Tribal Worldwide and Freeflow Productions director Roslee Yusof. 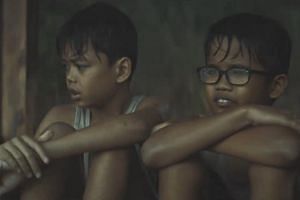 The entries were from Ms Nur Atiqah Ashari, 24; Mr Seneca Chiu Shengkai, 41; and Ms Noor Arfa Mohamad Yusoff, 22. They were hosted at PUB's headquarters in Scotts Road, where they helped develop the ending based on a storyline by Ms Noor Arfa.

Mrs Cindy Keng, director of PUB's 3P Network, said: "We felt it is only fitting to include fans' voices as part of this much-anticipated ending and co-create the appropriate ending for Din and Zul."

PUB said the team produced the ending as an audio story to better capture the sounds of Zul reading his letters to Din, and the emotions of the reunion.

Tribal Worldwide Singapore creative director Benson Toh said the audio story brings a fresh take on storytelling. "Dear Din, From Zul takes on a very personal perspective, which helps listeners get close to the heart of the story, and builds on the connection that people have already made with the original Kinship story."

Ms Noor Arfa said she enjoyed being part of the creative process. "I also really wanted to meet the scriptwriters and the child actors because they were so good."