When Singapore was a part of Malaysia from 1963 to 1965, the People's Action Party's (PAP) Malay assemblymen came under relentless pressure to choose race over nation, said Prime Minister Lee Hsien Loong yesterday.

They were also offered land and other riches to jump ship and join Umno, Malaysia's leading Malay party.

But the Malay members of the PAP were not cowed by threats of violence like the racial riots or tempted by wealth, and they remained resolute to the cause of multiracialism, he noted in his eulogy to pioneer Cabinet minister Othman Wok at a memorial service.

This led Malaysia's Deputy Prime Minister Tun Abdul Razak to conclude, during a visit to Singapore after the July 1964 racial riots, that Singapore Malays were different from Malayan Malays, Mr Lee said.

"Singaporeans were an altogether obstreperous people. Better for Singapore to leave Malaysia. That set in motion a train of events which led to August 9, 1965," he said of Singapore's Independence story.

Had the Malay PAP leaders wavered, the party would have lost the moral authority to champion its ideal of a multiracial country, and the Singapore story would have turned out very differently, he said. HE KEPT THE DREAM ALIVE

Othman was convinced, for good reason, that the (racial) riots (of 1964) had been deliberately instigated. The purpose was to intimidate Singaporeans and show them what could happen if they refused to submit to the mailed fist. The target was not just Chinese Singaporeans, but also Othman and the Malay PAP leaders.

But Othman and his comrades were not cowed. They had entered politics out of conviction and were determined not to betray their party and the values it stood for. They remained loyal to the PAP and the cause of multiracialism. Not a single Malay PAP Legislative Assemblyman jumped ship, though they knew they would have been richly rewarded had they done so.

But Othman and his Malay colleagues stood firm, and held a sufficient portion of the Singapore Malay ground. It is because they kept the dream of a multiracial society alive through those terrible dark days, that we are now able to say, 'We, the citizens of Singapore... regardless of race, language or religion.'

Mr Lee recounted the events as he described the Malay community's pivotal role in how Singapore turned out. "If Othman and his Malay colleagues had lost heart, the PAP's claim to be a multiracial party would have been severely damaged. Its cry of a 'Malaysian Malaysia' would have been exposed as empty.

"The federal government might have been emboldened to suppress the Singapore state government, and bring Singapore to heel. There might never have been an independent, multiracial Singapore.

"Othman and his Malay colleagues stood firm, and held a sufficient portion of the Singapore Malay ground. It is because they kept the dream of a multiracial society alive through those terrible dark days, that we are now able to say 'We, the citizens of Singapore... regardless of race, language or religion'," Mr Lee said.

Mr Othman, who died on Monday at age 92, had an illustrious life as a journalist, a writer, a unionist, a politician and a diplomat, the Prime Minister noted.

But the golden thread that ran through his life was his commitment to the ideal of a multiracial and multi-religious Singapore.

Mr Othman, who joined the PAP in 1954, became a member of the Legislative Assembly in 1963 after winning the Pasir Panjang constituency in the general election.

As a Malay PAP assemblyman during the days when communalist emotions ran high, he was abused, threatened and denounced by Malaysia's Umno politicians.

"They were called 'kafirs' or infidels. They received death threats. Othman recalled that some of his (election) posters were smeared with faeces," said Mr Lee.

It was also during this period that Mr Othman would witness the dangers of racial politics first-hand.

In July 1964, he was leading the PAP contingent in a procession to mark Prophet Muhammad's birthday when racial riots broke out and engulfed Singapore. A cool-headed Mr Othman led his group to safety, but the incident was seared in his memory.

In the aftermath of the riots, he accompanied then Prime Minister Lee Kuan Yew on community visits to calm the ground and restore confidence and racial harmony.

PM Lee said yesterday that in those tumultuous times, the Malay community in Singapore also held fast to the ideals of multiracialism.

When the Separation Agreement was being settled, Mr Lee Kuan Yew approached Mr Othman to ask if he would sign the document. He readily agreed, recounted PM Lee.

"That was a crucial decision. Singapore Malays would overnight cease being part of the majority race and become a minority community again. If Singapore Malays had not accepted that change, we could not have built a multiracial society.

"But it was because Malay Singaporeans and Malay PAP leaders in 1965 embraced the nobler dream of a shared national identity, 'regardless of race, language or religion', that we are able today to practise in Singapore a form of non-communal politics, based on justice and equality, that is unique in our region and rare in the world," PM Lee said.

When Mr Lee Kuan Yew stepped down as prime minister in 1990, he recommended to the President a special list of state honours to recognise the pioneers who had built Singapore. Mr Othman was awarded the Order of Nila Utama.

"As we look back on 92 years of Othman's life, we should also look ahead, to the future of Singapore. That was what he and his colleagues had fought for."

He recalled Mr Othman saying at an interview: "'You cannot just, like Kuan Yew says, go on auto-pilot... Our future generations must continue to build on things. Do not lose focus on sensitive issues such as race, language and religion.'

"So while it is with sorrow today that we bid farewell to one of Singapore's greatest sons, we also give thanks for the extraordinary life of one who gave so much of himself to the country."

Ending his eulogy with a Malay poem, PM Lee said: "Debts of gold we can repay, but debts of kindness will be carried to all our lives."

He added: On behalf of a grateful nation, thank you, Othman. May you rest in peace." 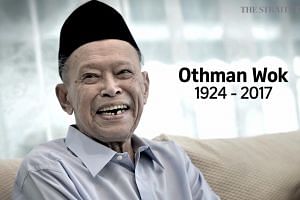 A version of this article appeared in the print edition of The Straits Times on April 20, 2017, with the headline 'PM: S'pore story would have been very different if not for Othman'. Subscribe
Topics:
More
Whatsapp Linkedin FB Messenger Telegram Reddit WeChat Pinterest Print Purchase Article Copy permalink