There are still opportunities to be seized amid uncertainties, he says

The Government is watching the uncertain global economic situation closely, but does not expect a severe downturn like in the global financial crisis of 2008, Prime Minister Lee Hsien Loong has said.

In his traditional Chinese New Year message as Singaporeans usher in the Year of the Monkey, Mr Lee noted that the world economy is slowing, China's economy is softening, stock markets are down and business sentiment here is guarded.

He pledged the Government's continued support for businesses and workers as they restructure and upgrade so they can prosper again "when conditions improve, as they will". 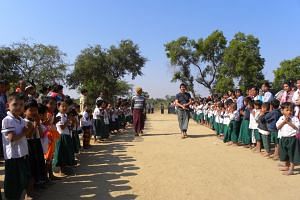 "We should take these ups and downs in our stride. We still enjoy full employment, and there are still opportunities to be seized, in Singapore and in the region," he said.

Mr Lee hoped Singaporeans would continue to take on these opportunities, and be quick-witted and dexterous, "just as the monkey leaps onto higher branches to pick peaches, and through his wit and agility takes care of himself, and stays at least one jump ahead of others".

They were all ordinary Singaporeans, but they all did extraordinary things. They brightened life a little, motivated only to put right what they found wrong, and bring solace and hope to those who were suffering or needed help. By helping others, and inspiring many more, they have made a difference to Singapore and to the world.

PM LEE, on the finalists of The Straits Times Singaporean of the Year award

But companies reported 60,000 vacancies as of September last year, down 11 per cent from a year ago.

Mr Lee devoted a large part of his message to the significance of Chinese New Year as a time when many catch up with their extended families, and welcome new additions.

He was delighted that more Singaporeans were born last year - 33,800, the highest in 13 years. The figure surpassed the figure for 2012, the last Dragon Year which is seen as a propitious time to have children and which has seen more births.

"I hope we will have more babies in the Year of the Monkey," he said, adding that the Government will continue to support Singaporeans in the many responsibilities and joys of parenthood.

Besides babies, family is also about living a full life and sharing joys and sorrows over a lifetime with loved ones, said Mr Lee.

He cited a recent short film commissioned by the Pioneer Generation Taskforce to raise awareness of MediShield Life.

It depicts the love story of an elderly couple over the years, and Mr Lee felt it encapsulated what family means: a pillar of support in good times and bad.

The family is also the model for how Singaporeans should relate to their fellow citizens, "seeing one another as members of an extended Singapore family", he added. 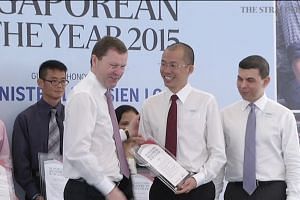 Mr Lee shared how he was humbled and inspired by the stories of the finalists of The Straits Times Singaporean of the Year award, whom he met last week.

He did not list their names, but cited the examples of Mr Ben Cheong, a builder of schools for the poor in the region; Ms Wong Li Wai, a nurse who risked her life to care for Ebola patients in Sierra Leone; Mr Ang Thiam Hock, a former sales consultant who opened up his home to at-risk youth; and sales promoter Noriza A. Mansor, who cleaned up and looked after a stranger who soiled himself while grocery shopping, and who won the award.

"They were all ordinary Singaporeans, but they all did extraordinary things. They brightened life a little, motivated only to put right what they found wrong, and bring solace and hope to those who were suffering or needed help," Mr Lee added.

"By helping others, and inspiring many more, they have made a difference to Singapore and to the world. That is what Singapore should be about. How we treat each other and what we are willing to do for one another defines who we are," he said.

"This country belongs to all of us, and is what we make of it. It is big hearts that must make our little red dot shine bright."