ON THE OUTLOOK FOR SINGAPORE

It is a challenging time for a country like Singapore, trying to find an economic strategy which will work for an economy, for a nation, not just for companies in it, but for the population and for citizens.

We are doing our own think exercise. We produced a report by the Committee on the Future Economy (CFE), which came out a couple of weeks ago. We had the Budget this week, which set out some of the strategies to realise the ideas we have. None of them is rocket science. The key is whether or not you can make it happen. And to make it happen faster than others, execute and bring everybody on board and see that this is the right strategy, which will work and which will benefit everybody.

(Technology) is in fact one of our areas of focus. In terms of physical growth, numbers, space, we reach constraints. But in terms of ideas, productivity, breakthroughs, the constraint is only what the human mind can come up with, what people can organise and deliver.

ON WHAT KEEPS HIM AWAKE AT NIGHT

Some of the things which keep you up at night, you cannot do anything about. We spent a lot of time worrying about the United States presidential election. There are other things which can go bump in the night because we are in uncharted waters. 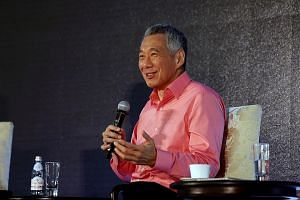 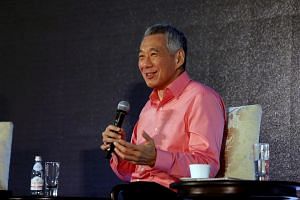 More can be done to capitalise on new tech: PM Lee Hsien Loong

There is a major change of direction in the United States. Other powers will react and how does that interaction work out? If it is a rebalancing, that is manageable. If it is destabilisation, you do not know what the consequences are. That is one big global uncertainty.

Within the region, we also watch very carefully the trends and our neighbouring countries. Whether they are focused on regional cooperation and integration, or whether their focus is on economic nationalism - like the mood in the United States and the developed countries...

We also have to watch our own domestic population trends, our demographic trends. That worries us a great deal and, again, it is something with no easy solution. Our birth rate is too low...

The Trans-Pacific Partnership is off. It is a great pity and it is a setback. We have to continue to pursue free trade with the other partners, which we will. And we hope that America, even under this administration, will in its own way seek to deepen its links with Asia, Europe and China. And in time, the mood in America will change, become again more confident and more open.

ON INTERVIEW QUESTIONS FOR POTENTIAL MINISTERS OR MPs

We ask what they read so we get some sense of what their interests are. We ask what they have been doing outside of their work so we see whether they have an interest in social issues, whether they have an interest in helping people. We ask what policy issues they care about and have a view on and would like the Government to change. That is usually the question which they find the hardest to answer because they are not sure whether to tell us that we are dead wrong on something or other. But if they give us a good answer, we give them very high marks.

ON WHAT HE DOES ON THE INTERNET

I have on my desktop the news websites open: BBC, The New York Times, The Straits Times, Channel NewsAsia. They are there all the time. Because of that, I do not watch the television news any more. If you want to see the snippet, it is there all the time. I have Facebook open and Instagram, because I have accounts.

I track what is happening to my posts, what people are saying and whether we have to respond to it or not. It is quite useful because without those, I would not reach out to significant segments of the population, here and overseas. It is also fun, if you do not become addicted to it.

What other websites do I go to? I look at a page called Astronomy Picture of the Day. Every day, there is a picture, a nebula, a supernova, the Sun, rings of Saturn, something like that. I sometimes look at blogs by mathematicians to track what they are doing...

I look at photography websites because I take pictures. You pick up ideas looking at what people do, how they take the pictures.

A version of this article appeared in the print edition of The Straits Times on February 27, 2017, with the headline 'PM on CFE, what keeps him up and what's on his Internet browser'. Subscribe
Topics:
More
Whatsapp Linkedin FB Messenger Telegram Reddit WeChat Pinterest Print Purchase Article Copy permalink