The late Mr Lee had made significant contributions during pivotal moments in Singapore's history, he wrote in the three-page letter to Madam Eng Ah Siam.

Known to friends as KC, Mr Lee was recruited by the late Mr S. Rajaratnam, Singapore's first foreign minister, to join the PAP in 1959.

As a journalist, Mr Lee had witnessed up close the major events that affected Singapore and the region, covering events such as the 1956 Merdeka talks in London to discuss self-government in Singapore.

PM Lee recounted how founding Prime Minister Lee Kuan Yew once described Mr Lee as "a man who 'had it', a man of courage who did not melt under pressure".

In the early 1960s, pro-communist factions in the PAP - that later broke away to form the Barisan Sosialis - had tried to woo Mr Lee, and threatened him when he refused to join them, said PM Lee.

He received a death threat in a letter with a bullet enclosed. In 1961, thousands of Chinese secondary school students also staged sit-ins where they threw rotten apples at him and shouted "Lee Khoon Choy, enter the coffin". 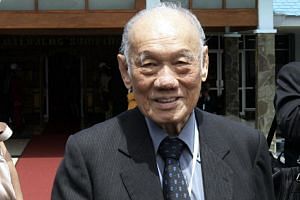 "But KC did not buckle. He was steadfast and loyal till the end," said PM Lee.

Mr Lee, who contested in the elections in the same year he joined the PAP, was elected the Legislative Assemblyman for Bukit Panjang.

He lost his seat in the 1963 elections. But two years later, he contested in a by-election in Hong Lim triggered by the resignation of PAP's Ong Eng Guan.

Said PM Lee: "It was a pivotal election that decided the future of Singapore."

Then, tension was high between Singapore and Kuala Lumpur and the federal government was testing the PAP's support.

PM Lee added: "The outcome of the election would determine whether they could take over Singapore or kick us out of Malaysia. Fortunately, KC won in Hong Lim. One month later, Singapore separated from Malaysia."

As ambassador to Indonesia in the 1970s, Mr Lee also "played a crucial role in thawing relations between Singapore and Indonesia", said PM Lee.

At that time, Singapore had hanged two Indonesian commandos who had bombed the McDonald House in Dhoby Ghaut in 1965 and killed innocent civilians.

"KC had developed a good understanding of the Indonesian psyche. He persuaded Mr Lee Kuan Yew to make a conciliatory gesture of scattering flowers at the graves of the two commandos in Jakarta," said PM Lee.

"The gesture enabled Mr Lee Kuan Yew to establish a relationship with President Suharto and set Singapore and Indonesia on a path of friendship and cooperation."

In recognition of his contributions, he was awarded the Distinguished Service Order by the Government in 1990.

After Mr Lee retired from public service, he went back to writing and painting, which PM Lee described as his "first love".

In 2013, PM Lee had launched Mr Lee's book, Golden Dragon And Purple Phoenix, which traced the history and influence of inter-marriages between Chinese immigrants and South-east Asian natives in the region.

PM Lee said Mr Lee had "always been interested in where we come from", and had once told him that every human being should know his own roots. Like trees, those who do not know their roots cannot grow, Mr Lee had said.

"Indeed, as we remember his life, we remember our roots and what our pioneers like him did, to put Singapore on the path it is today," said PM Lee.

Apart from his wife, Mr Lee leaves behind seven children and 11 grandchildren. His wake will be held at the Mount Vernon Sanctuary on Monday and Tuesday.