Mr Lee, 64, is taking medical leave on the advice of doctors after suffering a near-fainting spell on stage during the National Day Rally on Sunday (Aug 21).

Doctors have confirmed there were no cardiac abnormalities and no stroke, the statement said. It added that Mr Lee had taken ill due to a temporary drop in blood pressure, due to prolonged standing, exhaustion, and dehydration 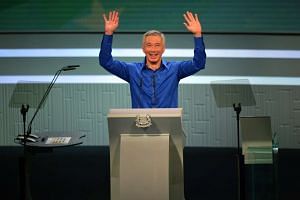 Dangers of dehydration, standing for too long

Mr Lee underwent a check-up at the Singapore General Hospital following the rally and medical tests came back clear.

Foreign Affairs Minister Vivian Balakrishnan posted on Facebook Monday morning and described the incident - which saw Mr Lee pause and falter during his English speech at around 9.20pm as the audience looked on anxiously - as a "vasovagal episode".

A vasovagal response results from an abnormal circulatory reflex resulting in abnormal relaxation of the body's blood vessels. A person usually faints during such a reaction.

Mr Lee returned to the stage at 10.40pm to a standing ovation and continued delivering his speech for another 15 minutes.

He posted a short Facebook update on Monday, thanking viewers for watching the speech.

In a longer statement half an hour later, Mr Lee offered “heartfelt thanks to all of you for your concern and good wishes”.

" I’m glad to report that the doctors think I am ok, but they have advised me to rest, so I will be on MC for this week," he added.

His Facebook followers returned the sentiment, with one user, Evangeline Yap, writing: “Thank you for going back to finish your speech despite being unwell.”