"On behalf of the Association of South-east Asian Nations (Asean) and as Chair of Asean, I am pleased to extend our most heartfelt congratulations to the Government of the People's Republic of China on the auspicious occasion of the 15th anniversary of the Asean-China Strategic Partnership for Peace and Prosperity," Mr Lee said.

The partnership was established on Oct 8, 2003.

"Asean and China share a strong, substantial and mutually beneficial relationship," he added, noting the many milestones in the China-Asean relationship - China was the first Asean dialogue partner to establish a strategic partnership with Asean, the first to accede to the Treaty of Amity and Cooperation in South-east Asia, and the first to conclude a Free Trade Agreement (FTA) with Asean.

Over the past 15 years, the partnership has broadened and deepened significantly across the political-security, economic and socio-cultural pillars, he said.

On the economic front, China has been Asean's top trading partner for eight consecutive years and is also Asean's third-largest source of foreign direct investment.

"Economic ties, which continue to be a central plank in our cooperation, have grown from strength to strength," Mr Lee said in the letter, the contents of which were released by the Ministry of Foreign Affairs.

Speaking of the Asean-China FTA (ACFTA), signed in 2010 and upgraded in 2015, he said: "The ACFTA has played a significant role in Asean's economic integration."

He also noted that Asean and China had also worked closely together and shared a commitment to substantially conclude negotiations by the end of this year on the Regional Comprehensive Economic Partnership. The free trade deal is being negotiated between the 10 Asean states and Australia, China, India, Japan, South Korea and New Zealand. 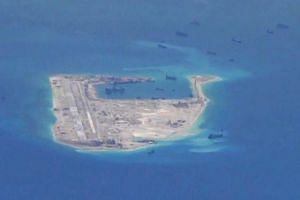 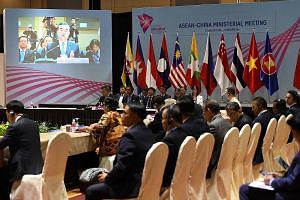 China and Asean: Big gains from a simple maritime exercise

Remarking on the rapid growth in people-to-people exchanges between Asean and China, with two-way tourist arrivals exceeding 30 million in 2016, he said: "To bring our regions even closer, both sides are exploring ways to enhance connectivity through synergies between the Master Plan on Asean Connectivity 2025 and China's Belt and Road Initiative."

The masterplan encourages the development of the region's infrastructure, logistics, innovation, regulations and people mobility while China's initiative is a massive infrastructure programme across Asia, Africa and Europe.

"We are also working towards the full liberalisation of the Asean-China Air Transport Agreement," Mr Lee added.

On the strategic ties, he said both sides had made strides towards deepening mutual trust, confidence and understanding, mentioning that Asean and China adopted the Framework of the Code of Conduct in the South China Sea (COC) in 2017, and announced the agreement on a Single Draft COC Negotiating Text earlier this year. The COC sets out rules and norms related to territorial disputes in the South China Sea.

"Our defence establishments have consistently engaged in dialogue and practical cooperation to enhance mutual trust and confidence, including through the Asean-China Maritime Exercise this year," he said. "Underlying our close cooperation is a shared belief that a peaceful and stable region serves the interest of both Asean and China."

The two-day table-top exercise, which did not involve actual drills, was hosted by the Republic of Singapore Navy at the base's Multinational Operations and Exercises Centre. It saw participants cooperate on maritime safety incidents in international waters, such as the collision of merchant ships and an oil tanker catching fire.

PM Lee said he looked forward to meeting Mr Li next month as more steps to deepen ties are unveiled.

"I look forward to the adoption of the Asean-China Strategic Partnership Vision 2030 statement at the 21st Asean-China Summit in November in Singapore. The Statement will chart the strategic direction of our cooperation going forward," Mr Lee said.

A successful conclusion to the "Asean-China Year of Innovation", which has driven a search for new areas of collaboration such as fintech, e-commerce and smart cities, will also be marked.

"On behalf of Asean, I would like to take this opportunity to thank China for its continued support for Asean Centrality and Asean's community-building efforts," he said.

He thanked Mr Li for his "personal efforts" in advancing China's relations with Asean, and added: "I look forward to welcoming you to Singapore this November, and to continue working with Asean and Chinese colleagues to bring Asean-China relations to greater heights."

Premier Li, in his congratulatory letter to Mr Lee, noted that China was the first to accede to the Treaty of Amity and cooperation in South-east Asia in 2003, and the first to establish a strategic partnership with Asean.

"Thanks to the concerted efforts of China and Asean countries over the past 15 years, China-Asean relations have maintained sound and steady development, as evidenced by stronger political mutual trust, closer business ties, fruitful and mutually beneficial cooperation, and unprecedentedly robust people-to-people exchanges. This relationship has delivered tangible benefits to the two billion people of our both sides, and prompted peace, stability and prosperity of this region and beyond," Mr Li wrote.

He added that China-Asean relations, which are set to mature and upgrade, are embracing new opportunities, and China has always seen Asean as a priority in its neighbourhood diplomacy.

"China is committed to be Asean's good partner for common development, peace, greater openness, win-win progress, innovation, inclusiveness and mutual learning. We will work with Asean to build a strategic partnership at a higher level and an even stronger community with a shared future, taking our relations to an even brighter future," Mr Li wrote.