Changes to insurance plans for Muslims going to Mecca in Saudi Arabia for their minor pilgrimage, or "umrah", may come as soon as the end of this month.

The Sunday Times understands the new measures will offer pilgrims a higher limit for medical expenses and unlimited coverage for emergency medical evacuation.

But pilgrims are expected to pay additional premiums for the increased coverage.

Sources told ST that a recent case involving Mr Abdul Ghafur Mohd Ibrahim, 59, a pilgrim whose left leg had to be amputated above the knee because of a flesh-eating infection, has spurred discussions within the Muslim travel agency community.

The core issue stems from the compulsory $35 insurance plan, covering only $20,000 for hospitalisation and $50,000 for repatriation, which some see as insufficient coverage. 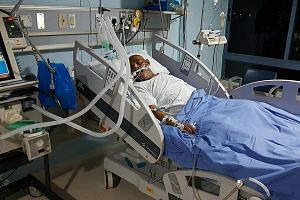 Mr Ayoob Angullia of ST&T International, the only company authorised to sell insurance to pilgrims here going to Saudi Arabia, told ST his aim is to offer "better coverage" to all pilgrims.

Declining to go into details about the changes, Mr Ayoob, 61, the managing director, said: "We don't want to make the premiums high. (We want) something that is practical and affordable."

The changes will apply only to the umrah and not the haj where pilgrims already have more comprehensive coverage via the higher premium (about $150) they pay for insurance.

The Association of Muslim Travel Agents of Singapore (Amtas), which has more than 30 members, appoints ST&T International to handle insurance issues through its underwriter United Overseas Insurance in Singapore.

At present, pilgrims performing their umrah are expected to take up the $35 plan, which provides free emergency medical assistance in Saudi Arabia.

But there is a cap of about $20,000, and additional medical expenses must be paid for by the pilgrim, according to Mr Mohamed Roslan Jaafar, Amtas' general secretary.

Mr Roslan, 61, said the authorities have made the $35 plan compulsory and it includes an insolvency clause in case the travel agency goes bust.

On top of the $35, pilgrims who travel to nearby countries like Jordan, Egypt, Israel or Turkey during their umrah must pay an additional $20 for more coverage, as Mr Abdul Ghafur did.

But the onus is on pilgrims to arm themselves with extra insurance coverage, said Mr Roslan.

He pointed out: "Some pilgrims say there's no need for extra insurance. But when there's a problem (and you don't have enough insurance coverage), it's just too late."

Still, nobody can force the pilgrims to pay for extra coverage because some of them may already have travel insurance or life insurance coverage.

While it is the duty of the Muslim travel agencies to explain the clauses within the $35 plan, it is the pilgrims who should read the fine print and know exactly what is covered under the plan they buy, said Mr Roslan.

That is because it is "not a full insurance plan", he added.

Under the new scheme to be implemented, pilgrims can expect to pay about $99 for a 14-day insurance plan.

Mr Ayoob said that if a pilgrim wants more coverage, he or she can opt for the more premium insurance packages offered by his company.

We don't want to make the premiums high. (We want) something that is practical and affordable.

Some pilgrims say there's no need for extra insurance. But when there's a problem (and you don't have enough insurance coverage), it's just too late.

During the recent umrah period - from November to December - as many as 10,700 pilgrims from Singapore went to Saudi Arabia.

Of that figure, there were seven cases in which pilgrims had to be hospitalised. ST understands that two were medically evacuated.

Only one person, Mr Abdul Ghafur, a Singapore permanent resident from Malaysia, has yet to return.

Cases in which pilgrims were given outpatient treatment were due to the cold weather, said Mr Ayoob.

Even though pilgrims will soon be shielded by better coverage, Mr Ayoob has advised them to be disciplined.

He added: "Those (pilgrims) who are supposed to take medication must take their medication. They must take precautions not to get hurt. If something happens, they must get medical attention as soon as possible and not take chances or risks."