Lim Chu Kang Road is normally a thoroughfare for heavy vehicles, but today and tomorrow it will serve a very different purpose.

For the past two days, its traffic lights and bus stops have been removed to make way for portable airfield lights and a mobile air traffic control tower.

The Republic of Singapore Air Force's (RSAF) Exercise Torrent will see 12 fighter jets taking off and landing across four runways - Lim Chu Kang Road and three others in Tengah Air Base - in quick succession.

The road, which will be returned to normal on Monday, will give the RSAF the extra capacity to get many planes in the air as quickly as it can.

"Being able to take off and land aircraft rapidly has a lot of significance for an operational air force," Brigadier-General Gan Siow Huang, commander of the Air Power Generation Command and the exercise's director, said yesterday. "The faster and the more aircraft you can launch in a short period of time, the more air power you can bring to defend Singapore."

It is the seventh Exercise Torrent since 1986 but the first time the new F-15SG jets will be taking part. These jets are larger and heavier than the older F-16s, so the RSAF has to make sure Lim Chu Kang Road is strong enough to handle their weight.

Another first is the use of a mobile arrestor gear system, which rapidly slows down an aircraft upon landing. The braking system is firmly anchored to the ground by 1.5m long metal stakes, and involves a thick steel cable stretched across the runway. When a plane lands on a particularly short runway, or if its brakes are not working, it latches onto the cable and is pulled to a halt. 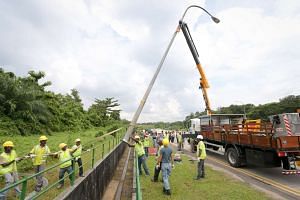 In Pictures: Lim Chu Kang Road is converted into an aircraft runway for RSAF exercise

Although the main runway at the air base is 46m across, Lim Chu Kang Road is only 24m wide. This means that pilots like Lieutenant- Colonel Tan Hwee Roy, 39, must be precise when taking off and landing.

"We don't have as much margin for error. We need to make sure we are dead centre. If we are off to the left or right... we might run off the runway if we're not careful."

In total, the exercise involves around 1,000 people, including NSmen, full-time national servicemen and regulars. "This is not a trivial thing," BG Gan said. "It's very demanding for the air crew, air traffic controllers and the ground crew - making sure the aircraft, whether they are in the air or on the ground, are able to manoeuvre safely."