SINGAPORE - A snake was reportedly sighted around a lamp post in a housing estate in Bukit Batok on Monday (Oct 23) morning, with pest control and even the police called in to help remove the creature.

Footage circulating on social media showed the snake, which appeared to be a reticulated python, coiled around the top of the lamp post.

A man believed to be from a pest control company was seen trying to capture the snake, while passers-by looked on. The snake then fell with a thud on the ground, to exclamations from the onlookers.

Two policemen were present to help him place the snake in a sack.

The Straits Times understands that the snake was captured around 7am at Block 419, Bukit Batok West Avenue 2, on Monday. 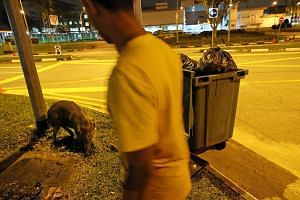 "The handling of the snake in the video is incorrect," he said. "These snakes are part of our native fauna and should be handled properly. I hope the poor python did not suffer any injuries from the fall or from being mishandled."

He added that those who spot snakes should call Acres' hotline (9783-7782) instead of calling pest control.

The snake had been spotted at that site from as early as 5am on Monday, according to a report in Lianhe Wanbao.

A resident living in that block, who gave his name only as Mr Chen, told Wanbao that he had woken to feed some cats when he looked out of the window to see a snake at the basketball court.

As he was afraid it would be a danger to residents, he ran down and threw an object at the snake, hoping to draw its attention.

The snake reacted by climbing up the lamp post, where it stayed.

Mr Chen, a 62-year-old retiree, then notified the town council before leaving.