With the rise of fake news, people are willing to pay for online news that they trust, research on digital media trends shows.

This means news organisations must find ways to win that trust - and therefore dollars - of readers, particularly youth, said editors, publishers and researchers at a conference on digital media.

Funding good-quality news will help to counter fake news, which is a problem not just for media outlets but also for all of society, they added.

The issue was among several discussed at the three-day Digital Media Asia 2017 conference, which ended yesterday.

"We do have data suggesting there is a relationship between trust in news and willingness to actually pay for digital news," said Chinese University of Hong Kong journalism professor Francis Lee. He cited a regional version of the Reuters Institute Digital News Report 2017, which polled 14,000 people in seven Asia-Pacific markets, including Singapore. It found that trust in a news outlet can fuel people's willingness to pay for news, he said. But such readers are still in the minority, with only an average of 13 to 14 per cent of people paying for online news.

Said Mr Warren Fernandez, The Straits Times editor and editor-in-chief of Singapore Press Holdings' English/Malay/Tamil Media Group: "All round the world, media organisations, and societies, are grappling with how to build a new business model that will enable the media to deliver good journalism."

That, he added, entailed reliable, properly verified information, served on whatever platform readers preferred, so they had the information they needed to make critical choices. Delivering this, however, required resources and did not come cheap, he argued.

All round the world, media organisations, and societies, are grappling with how to build a new business model that will enable the media to deliver good journalism.

If news organisations and societies fail to get this right, it will pave the way for fake news to proliferate and democracy to be weakened. That is a big challenge for societies, and not only for media organisations, he said.

Mr Fernandez and other editors discussed how Asia-Pacific nations are fighting the spread of fake news.

These included workshops for journalists and a "hackathon" at which students brainstormed solutions to boost news literacy.

The authorities have stepped in too, with the police in Indonesia shutting down the Saracen fake news syndicate in September.

Jakarta Post editor-in-chief Endy Bayuni said that while more in Indonesia are now aware of fake news, such news has not been curtailed. 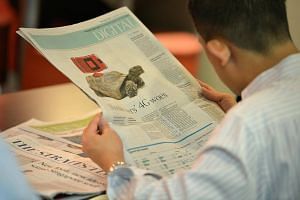 ST stays ahead of pack, with its print and digital offerings

Citing an incident in Jakarta in September, when a mob attacked a legal aid group's headquarters based on rumours that communists were gathering there, he said: "Fake news can mobilise people and provoke them into violence."

The conference, organised by the World Association of Newspapers and News Publishers, also addressed business concerns such as using big data to understand user habits.