HTX will have 1,300 staff, consolidate Home Team's resources when set up in December

The Home Team Science and Technology Agency, which has been tasked with developing cutting-edge capabilities for security or life-saving operations, will be known as HTX for short, with "X" symbolising its role as a force multiplier.

The new agency will focus on areas such as surveillance, forensics, robotics and other unmanned systems, as well as chemical, biological, radiological, nuclear and explosive threats.

"HTX will build cutting-edge and transformative capabilities that will augment the Home Team far beyond our 27,000 regular and 54,000 national service and volunteer officers," said Second Minister for Home Affairs Josephine Teo in Parliament yesterday.

Targeted to be set up in December, HTX will group all the scientific and technological resources of the Home Team's various departments under one roof, said Mrs Teo when she presented the Home Team Science and Technology Agency Bill, passed yesterday, for debate.

The agency was announced by Deputy Prime Minister and Minister for Finance Heng Swee Keat during his Budget speech in February.

Mrs Teo said the HTX will initially be staffed by about 1,300 science and technology officers from different Home Team departments.

It will also work with the Immigration and Checkpoints Authority on the New Clearance Concept (NCC), which promises travellers greater convenience without compromising security, said Mrs Teo.

She said the NCC, to be launched in 2022, will need to incorporate several different domains of technology, including the capturing of biometric information and the use of smart sensors, such as cameras, to identify persons of interest. 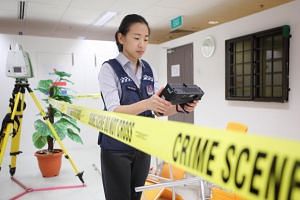 Beyond systems and solutions, Mrs Teo said, HTX will better enable Home Team departments to adopt a "One Home Team approach" in joint operations to respond to a terror incident, for example.

In response, Mrs Teo said that the mission, operating environment and requirements of these agencies differ from those of the Home Team, and that there is enough scale within the Home Team to merit a dedicated agency.

"If we don't put (what is needed by the Home Team) as the focus of a dedicated agency, then you must run the risk that these are ancillary to other agencies," she said. "Then it will be a question mark whether you can build up sufficient capabilities in a short time to counter the challenges."

Privacy concerns were also raised. Mr Louis Ng (Nee Soon GRC) said that even as Singaporeans feel physically safe, they have become uneasy about giving away their data, with the spate of recent breaches involving government agencies.

Mrs Teo said that Home Team departments will continue to collect data in accordance with their statutory duties or to maintain their mission effectiveness.

She also said it is unlikely that HTX officers will collect personal data in the course of their duties.

But the agency will safeguard the Home Team's IT systems, and the data within, through the 24/7 MHA Security Operations Centre, which will provide immediate responses and investigations into cyber-security incidents and issues, she added.