SINGAPORE - A new fund, to be run by the Law Society, may be set up to handle client money that is left unclaimed in situations such as when a client goes incommunicado or when a sole proprietor dies.

If the proposal is passed in Parliament, the money in this fund will then be invested or used to fund pro bono services.

Should the clients later surface, they can make a claim for the money within six years, although the society has the discretion to make ex-gratia payments after the limitation period.

The Legal Profession (Amendment) Bill, to introduce the framework for the Unclaimed Money Fund, was tabled in Parliament on Friday (March 2).

Also in the Bill are new measures to the disciplinary process for lawyers and a move that allows foreign judges and academics to appear as experts before the Singapore International Commercial Court.

Under the existing Legal Profession Act, which governs the profession, lawyers are required to hold clients' money in a separate account - known as a client account - until the money is returned or paid out according to the clients' instructions.

Also, in specified circumstances - such as when a sole proprietor dies, is made bankrupt or becomes physically or mentally incapacitated - the Law Society has powers to intervene in client accounts. 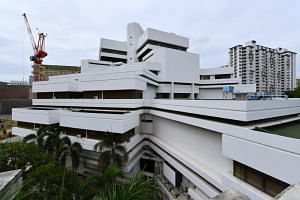 The client money in such a situation - known as "intervention money" - is paid into a special account, for the society to administer, and where possible, return to the lawful owner.

As at March 31 last year, the society is holding on trust $379,131 in unclaimed intervention money.

Currently, if intervention money is unclaimed after six years, it will be transferred to the Compensation Fund, which was set up in 1962 to compensate those who suffer financial losses due to the misconduct of dishonest lawyers.

Each of the 5,500 practising lawyers in Singapore contributes $100 a year to the Compensation Fund, which stands at about $13 million.

With the proposed changes, intervention money will now be channelled to the Unclaimed Money Fund, instead of the Compensation Fund.

The proposed framework also provides a fix for another set of circumstances that arise when a client has become uncontactable.

There have been anecdotal cases where lawyers are unable to retire or close their firms because they are holding money from a client who has gone incommunicado.

This is because the existing Act does not provide for what happens to unclaimed money when a client becomes uncontactable.

Lawyers who want to retire or close their firms have to find another practising lawyer to take over the administration of the client account. Otherwise, they have to continue incurring the expenses of maintaining the firm and the client account.

The proposed changes mean that lawyers will have the option of transferring unclaimed client money to the new fund.

This will relieve lawyers of the burden and expenses of maintaining the client account, allow lawyers who wish to retire to do so, and allow unclaimed client money to be used for a public good, said the Law Ministry.

Law Society president Gregory Vijayendran said the society has received feedback from lawyers who are “stuck” in such circumstances, but currently, the society is unable to assist them.

“Increasingly, with cross-border work and foreign clients, we’re talking about a few situations – for example, refunding balances in the client account – in which you may not be able to trace the individual concerned, even with the best efforts,” he said.

The society declined to reveal the quantum involved, given that such data is not curated due to its confidentiality. However, it said the sums were small, residual amounts, with a five-figure sum in one case.

“It’s a nifty, practical fix to reduce a lot of administration hassle for the lawyers involved so that they can close the chapter and move on,” said Mr Vijayendran.