SINGAPORE - More children are being born overseas to at least one Singaporean parent.

This is a result of more Singaporeans living, working or studying overseas for extended periods of time, said Senior Minister of State in the Prime Minister's Office Josephine Teo on Wednesday (April 13).

She added: "This shows how Singaporeans are increasingly mobile and welcomed by employers and educational institutions internationally."

Speaking at the debate on the spending plans of the Prime Minister's Office, Mrs Teo, who oversees population matters, said the Government has "kept a calibrated pace of immigration" to prevent the citizen population from shrinking.

A total of 20,815 citizenships were given out last year. Among these, 8 per cent, or 1,600, went to children who were born overseas to at least one Singaporean parent, or "Singapore citizens by descent".

In the same period, 29,955 people were granted permanent residency.

Mrs Teo said more should be done to help new citizens deepen their sense of belonging in Singapore.

She suggested that they should get involved in all aspects of local life, such as learning to speak local languages.

She also urged Singaporeans to remain open to people of diverse backgrounds. 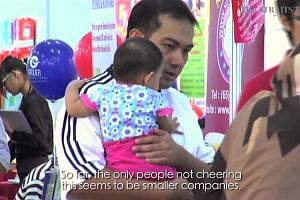 But rather than grow the population more quickly through immigration, "we have decided to press on with the restructuring of our economy towards one that is less dependent on manpower for growth", she said.

As a result, the growth of foreign workforce has slowed considerably, she noted.

She said: "Our vision must be a Singapore that is cohesive and open, where Singaporeans feel a sense of connectedness wherever they are in the world... and at the same time, have the capacity to welcome new additions to our family whether for a period of time or for good."