SINGAPORE - Unit commanders will be marked in their performance reviews for not meeting standards and committing safety lapses, even if accidents do not occur, said Defence Minister Ng Eng Hen in Parliament on Monday (Feb 11).

He made this point as he re-emphasised the need to have a strong safety culture in all units and safety consciousness "down to the last soldier", if zero fatalities during national service training is to be achieved.

Dr Ng was giving a ministerial statement in response to 20 questions filed by MPs on recent training deaths as well as safety measures taken by the Singapore Armed Forces.

On commanders who do not meet safety standards, he said: "Let me emphasise that such commanders will be marked as having performed unsatisfactorily even if accidents have not occurred. This is the right emphasis to prevent accidents."

He added: "Commanders and supervisors must lead by example in emphasising safety, and safety lapses will affect their performance review... Soldiers must have a strong respect for safety rules, take care of one another, and speak out on safety concerns.

"Incentives and disincentives must be aligned to achieve the right safety outcomes. Our safety systems must weed out unsafe practices, even when they do not lead to accidents."

He said that in the past three years, an average of 2 per cent of servicemen a year have been punished under the SAF Act for safety lapses.

Their punishments ranged from a fine to detention, as well as administrative penalties such as delays in promotions and reductions in benefits. 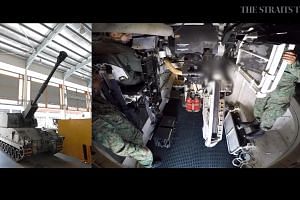 On the other hand, servicemen who demonstrate good behaviour are rewarded, and units and individuals are recognised during the different services' annual Safety Day.

"If we have a strong safety culture and safety systems, it will give soldiers greater confidence to train hard and realistically.

"SAF commanders are convinced that it can be done, and these measures I have outlined today will lead us to that goal of achieving zero training fatalities," he said.

He said soldiers can highlight risky behaviour and safety breaches to their superiors without fear of reprisal, and any soldier regardless of rank can call for an immediate stop to training if he has spotted safety breaches or unsafe practices.

Servicemen can also report safety incidents and near-misses through a 24-hour safety hotline, which has received about 140 calls a year.

Dr Ng gave details of the newly announced Inspector-General's Office (IGO), which will be an expansion of the current Safety and Systems Review Directorate.

The Inspector-General will report jointly to the Permanent Secretary (Defence) and the Chief of Defence Force, and the IGO will submit regular safety performance reports to the Defence Minister, said Mindef on Monday.

This was after the External Review Panel on Singapore Armed Forces Safety found that the safety policies and management systems of the SAF are largely in place, but identified the need for more compliance checks and ground-level audits, said Dr Ng.

The Defence Ministry announced on Jan 31 that the new IGO will be set up with the full authority to scrutinise and enforce safety processes and practices at all levels of the SAF. It will be set up in the "early half" of 2019, said Mindef.

The Inspector-General will concurrently be the Chief of Staff-Joint Staff, an existing appointment equivalent to a service chief.

Dr Ng said: "This dual function is synergistic as the (Chief of Staff-Joint Staff) has an overview of all operations and, as Inspection-General, will have the authority to ensure that 'safety first' habits and processes are incorporated at all levels of training."