SINGAPORE - Police have determined that one of the drivers in two kidnap scares involving international students had no ill intent, but students and parents are not taking any chances.

Many students from the two schools that The Straits Times spoke to on Thursday morning (Jan 18) said that the van driver in the case should have been more aware that his actions were alarming. Parents said they would still be cautious.

In the first case last Thursday, a United World College (UWC) South-east Asia Dover campus middle-school student, who would have been between 11 and 14 years old, was waiting for the bus in Dover Road when she was approached by a man driving a van who asked the student to get into the vehicle.

She walked away, and later filed a police report with her parents.

It is understood that the driver claimed he merely offered a lift to the student because it was raining then.

The second incident involved a female student from Tanglin Trust School in Portsdown Road. She was walking to school on Tuesday at 12.30pm from one-north MRT station when she was approached by two people in a white van - said to be driven by a woman - who asked her to get in. 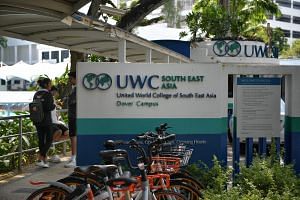 The girl ignored them and continued to walk to school. The two occupants of the van then got out of their vehicle and continued to try to persuade her to get in, but she moved away quickly and arrived at school safely.

Even as parents were sending their children to UWC in Dover on Thursday morning, with a long line of cars waiting their turn to drop off the students, there were still concerns over last week's incident even though the man involved was determined to have had no ill intent.

Seven-year-old Pragya Kumar, who studies at the school, said that even if the man in the first case claimed he was just being helpful, it did not make her feel any better.

"I am scared. Nothing good happens whenever a girl meets a van like that. I'm afraid that it could happen to me," she said.

Another student Leon Lee, 14, had similar sentiments. "It isn't really a comfortable feeling being helped by someone you don't know in that way. It just all seems too suspicious," he said. Over at Tanglin Trust School on Thursday morning, a long line of cars also waited to get into the school compound. Drivers had to bring special passes identifying themselves as parents or guardians.

Housewife and parent Jasmine Gan, 31, said that while the measures had been in place for some time, the school became stricter in enforcing them at the start of the school year last August.

Corporate secretary Ellen Tsai, 37, who accompanies her young son to the school every morning, said she would continue to do so and not take chances, especially in light of the cases: "I would rather err on the side of caution."

Even so, some students were not overly perturbed.

A Tanglin Trust School student, Jeremy Nanayakkara, 14, said that while he was not too worried, he would still keep an eye out for unusual behaviour.

He said that, whether rightly or wrongly, there is a sense that there are rich kids in international schools and this could make them kidnap targets.

He also praised the school for taking swift action in informing students about the incident and reminding students to keep themselves safe.

"There had been a rumour at first that the student had been abducted - the school quickly shut that down," Jeremy said.

His schoolmate, Feyo Marseille, 13, added that many students are aware that they should walk in groups or near one another, to minimise the risk of being targets as a result of being alone.

UWC student Jonathan Barel, 13, said that learning of the driver's intention in the UWC case did make him feel better about the incident.

"I still feel safe, because (kidnapping) doesn't happen often in Singapore," he said.

Mr Alfred Tan, chief executive officer of the Singapore Children’s Society, said parents should constantly educate their children not to talk to strangers, nor accept any offers that have not been arranged by them or an adult they know.

“I would suggest to parents to revisit this topic. While the incidents were at international schools, it could happen to anyone in a local school too,” he said.

Even if it is raining heavily and there is a thunderstorm, children should not accept ride offers from someone they do not know, he said.

Mr Tan also suggested that the prevalence of private-hire cars, such as Grab and Uber, may lead to children being more accepting of an offer of a lift from strangers.

“These do not look like typical taxis. So young children can get confused, and think that as long as the offer looks legitimate, it is safe to hop in,” he explained.