SINGAPORE - Parents should play the main role in inculcating the right moral values in their children, according to most parents and non-parents in a survey. But many parents also said a lack of time with their children poses a challenge.

The findings are from the latest Graciousness Survey commissioned by the Singapore Kindness Movement (SKM), which tracks experiences and perceptions of kindness and graciousness, released on Tuesday (June 27).

The study polled 3,066 people via face-to-face interviews over two phases - from July to August 2016 and from December 2016 to January 2017. Questions about the role of parents were included in only the second phase of the study, which had 1,509 respondents, including 557 parents.

More than 90 per cent of the respondents, including non-parents, agreed or strongly agreed that parents should play the main role in inculcating the right moral values in their children, and agreed that they could do more to inculcate such values. About a quarter of the parents among those polled said a lack of time with their children was a challenge in inculcating these values.

The study also found that Singapore residents remain generally positive about the state of graciousness and kindness here. More Singaporeans also agree that they can and should take more ownership in promoting positive social values. 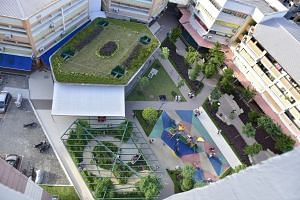 SKM general secretary William Wan said: "I am heartened to learn that Singaporeans generally remain positive about the state of kindness and graciousness in Singapore, given the prominence of some incidents that have gone viral recently. We need to continue to strive for kindness - both online and face-to-face - so as to make society ever better and more positive, one which we all would like to live in and belong to."

The annual survey used to have a Graciousness Index, with Singapore scoring 61 out of 100 in 2015, the last time when such figures were released. But organisers said the score had not changed significantly in recent years, and decided to do away with putting a quantitative score on graciousness.

The latest survey also provided insights on attitudes towards key community issues such as neighbourliness and the state of integration.

Respondents were generally satisfied with the current state of neighbourliness. However, more respondents also said that they are unaware of, or uninterested in opportunities to interact more deeply with their neighbours, and that they treasure privacy at home.

Regarding the attitudes of Singaporeans and foreign residents towards each other, there was more mutual understanding and appreciation of each other's efforts to be welcoming and to assimilate and integrate. They also recognised that interactions with each other were mostly at work and school, and that more could be done to create opportunities for interaction beyond such institutions.

"I'm encouraged to see people continuing to carry out acts of kindness," says Dr Wan. "I hope that we will continue to amplify this in the decisions that we make in everyday scenarios - be it interacting with our friends at school, our colleagues at work or welcoming new residents into our neighbourhoods."