Globally, NUS is at 11th spot while NTU moves up a notch to 12th among 1,300 universities

Globally, NUS has come in 11th, keeping its spot from last year, while NTU has moved up a notch to 12th place in a league table comparing 1,300 universities.

This is the fourth consecutive year NUS has held the No. 1 position among Asian universities in the Britain-based firm's rankings.

QS is a higher education analysis company, and this is the 18th edition of its annual ranking exercise.

The global top 10 continued to be dominated by American and British institutions.

The Massachusetts Institute of Technology (MIT) in the United States topped the list, while the University of Oxford in Britain came in second.

Stanford University in the US and Britain's University of Cambridge tied for third place.

The only university in the top 10 from outside the US and Britain was the Swiss Federal Institute of Technology in Zurich, which tied for 8th place with Britain's University College London.

After NUS and NTU, the highest-ranked Asian universities on the chart are China's Tsinghua and Peking universities, placed 17th and 18th, respectively.

NTU has continued to rise through the global university rankings, moving up 29 places on the QS list since 2013. 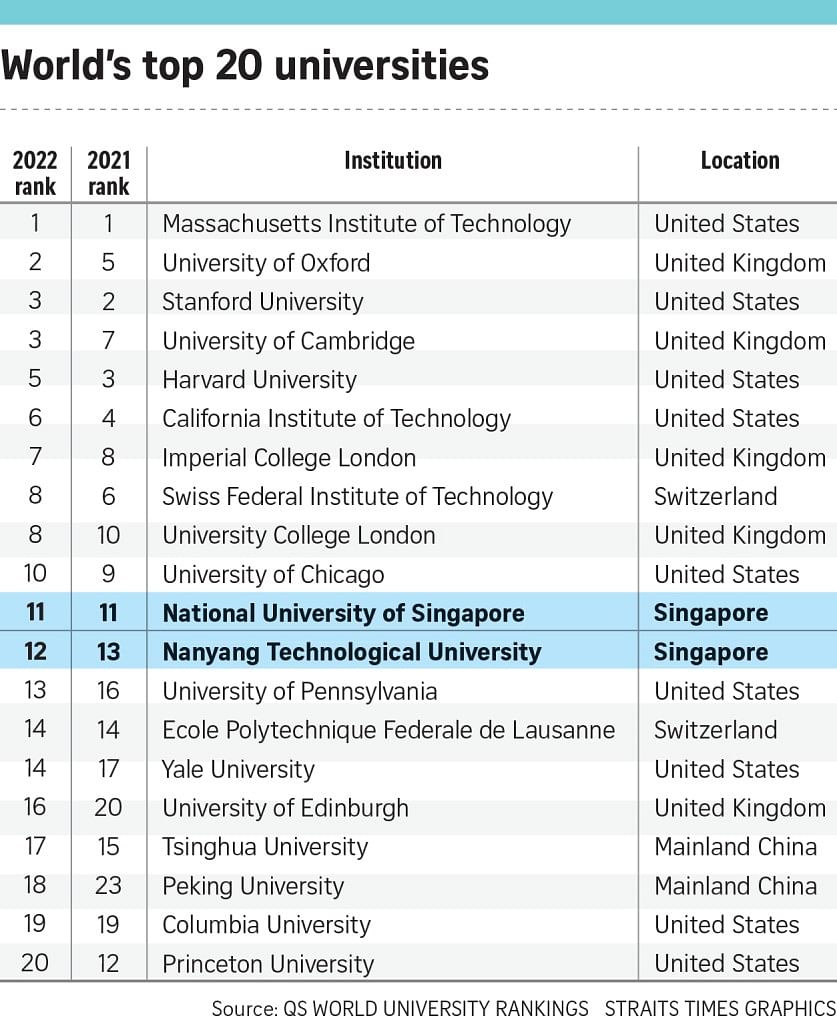 NTU president Subra Suresh said: "NTU's focus on academic and research excellence has contributed to our rise in local and global stature.

"NTU provides an exceptional environment for learning as well as high-impact research and innovation, as seen from several independent international rankings."

"Very few universities have done more to attract top international faculty from across the world than NUS and NTU, and their high levels of research impact are a direct result of this global outlook."

NUS president Tan Eng Chye said: "We are pleased with NUS' strong performance in the latest QS World University Rankings and the recognition given as one of the leading universities in the world and in Asia.

"NUS has distinguished itself in the area of research, and we will continue to grow our capabilities, particularly in interdisciplinary research, to develop innovative and translational solutions to address increasingly complex challenges and global uncertainties like the Covid-19 pandemic."

NTU overtook MIT to become the world's leading institution for the study of materials science.

QS has also placed the NUS petroleum engineering programme at No. 1.