SINGAPORE - A police report has been lodged against a parallel car importer in Sin Ming, which allegedly owes at least 10 buyers about $250,000.

Star Link Pte Ltd - located on the ground floor of a block at Midview City - was closed when concerned car buyers gathered outside its office on Tuesday (May 2), Lianhe Wanbao reported.

Police officers were also also seen at the scene, along with about 10 affected buyers.

When The Straits Times visited Star Link's office on Wednesday at about 7pm, all three cars had already been moved out of the office. Lights had also been left on.

One of the three cars was ordered by buyer Mr Ruan, 41, who told Wanbao that he was supposed to have received delivery of it last Friday.

"But an employee told me the boss was not around then and said to collect the car on Tuesday. When I arrived, I found that the doors were locked," he added.

Another buyer, Madam Pan, 53, who works in sales, paid about $30,500 to Star Link. She was supposed to collect her car on Tuesday night, but had been unable to contact the firm when she tried calling that morning.

"I read newspaper reports of so many similar cases and thought I was already very careful - who knew I'd also be a victim?" she lamented. 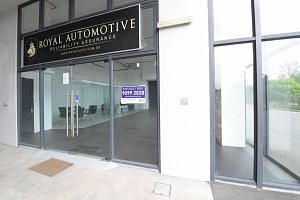 The Consumers Association of Singapore told Wanbao that it had received three complaints about Star Link since January this year.

All three complaints were about the firm not delivering cars to buyers on time after receiving payment.

When contacted by The Straits Times, police confirmed that a report has been lodged and that they are looking into the matter.

Parallel car importers have been in the news recently for getting into trouble with buyers.

In March, Royal Automotive in Woodlands closed down, affecting at least 13 buyers who claimed they were owed about $600,000.