SINGAPORE - The fourth-generation political leadership has to grow the "reservoir of trust" their predecessors have built, at a time when politics has become increasingly contested, said Deputy Prime Minister Heng Swee Keat.

"In a time of change, the PAP's approach to leadership must continue to be anchored on trust, unity and constructive politics," he told 300 party activists at the People's Action Party Policy Forum's 15th anniversary dinner on Wednesday night (July 24).

The forum was set up in 2004 to give rank-and-file party members a platform to engage government leaders on policy issues. Mr Heng had a closed-door dialogue with activists following the dinner.

In his address, the ruling party's first assistant secretary-general noted how trust between the PAP and the electorate was built over successive generations of PAP leaders, starting with then Prime Minister Lee Kuan Yew and his team.

Mr Heng had made similar points in a speech last month, when he announced the Singapore Together movement - the latest citizen engagement exercise helmed by 4G leaders to partner Singaporeans in designing and implementing solutions across a wider range of issues and policy areas.

"As Singaporeans experienced our society progressing from Third World to First, they saw that their trust was well-placed in a PAP government that delivered," he said on Wednesday.

This bond of trust deepened as the Government steered the country through turbulent periods like Sars and the global financial crisis, he added. 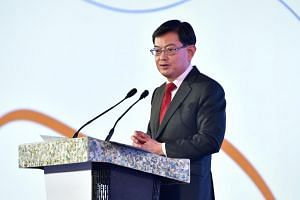 But trust between the people and their leaders cannot be inherited, he said, warning that the hard-earned bond can be easily lost in today's uncertain and volatile world, where a wave of disillusionment is sweeping across many mature societies.

He added that Singaporeans are now more diverse than in previous generations, with different views, values and expectations.

While political parties in some countries have exploited such differences, Mr Heng cautioned that the PAP should never let this happen in Singapore.

The party has to keep and grow the people's trust by always implementing policies with the longer-term interests of Singaporeans at heart, he said.

"Even in tough times we do the right thing, not the convenient thing… We must resist a downward spiral towards populism, and not hesitate to call out those who deal with empty promises and shallow slogans."

"We must not go down the road of divisive politics, along racial or religious lines, or pander to narrow interests," he said.

"We strive to represent Singaporeans from all walks of life, win support from the broad middle," he added.

Mr Heng also highlighted former deputy prime minister S. Rajaratnam's call for parties to focus on problem-solving in 1971 - what he termed a "democracy of deeds" - rather than on slogans and words.

Fifty years on, Singaporeans "must continue to uphold this spirit of constructive problem-solving", he said.

PAP activists, he added, can grow trust and expand this democracy of deeds in three ways: giving back to society, strengthening communication and teaming up with others to play a bigger role in nation-building.

On giving back, Mr Heng gave examples such as volunteering at Meet-the-People Sessions, helping out at community projects or existing initiatives like SG Cares.

"While each act of contribution may seem small, the cumulative impact of your actions can make a big difference, which can significantly shape our society," he said.

As for communication, Mr Heng urged activists to stay close to the ground, to better understand the diverse concerns and aspirations of different groups of Singaporeans.

He also encouraged them to listen to other points of view: "Singaporeans may hold a different view about the Government's policies. We should not shy away from engaging them."

He added that the party will strengthen training to help activists be better communicators.

On teaming up, Mr Heng encouraged activists to work with family, friends, colleagues and classmates "to envision our future together".

"Through this process, we can also build a stronger culture of respect and tolerance."