A citizens' panel to improve work-life harmony, an issue close to the hearts of many Singaporeans, will soon be launched by Manpower Minister Josephine Teo to tap people's ideas and perspectives.

The initiative is an example of the new way in which Singapore's fourth generation of leaders will work in partnership with Singaporeans, tapping their diversity of expertise to design and implement policies, Deputy Prime Minister Heng Swee Keat said yesterday.

In a speech, he gave the audience a sense of the style of governance - one which focuses on working with, rather than for, its people - that Singaporeans can expect from his team. This involves "room to debate and deliberate" on policies, with citizens working in partnership with the Government to improve and deliver policies.

"We will work hand-in-hand with more of you to design and implement solutions across a wider range of issues and policy areas," he said.

Other areas the Government will work with Singaporeans on are environmental sustainability, housing, social mobility and engaging younger Singaporeans on their vision for the nation through the Youth Action Plan. In each of these areas, one or more ministers will work with citizens to come up with solutions, Mr Heng said.

These will build on existing efforts to engage citizens, such as the Health Ministry's Citizens' Jury for the War on Diabetes or the multi-agency Uplift Taskforce to help disadvantaged children. 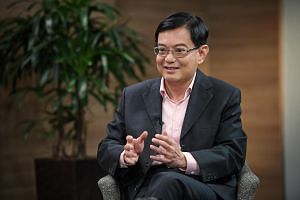 Govt to partner S'poreans in new ways to design policies together, says DPM Heng in setting out 4G leaders' plans

On environmental sustainability, Environment and Water Resources Minister Masagos Zulkifli and his team at the ministry are engaging citizens, civil society and businesses to come up with concrete action in this area.

In housing, National Development Minister Lawrence Wong and his team will work more closely with residents to shape their living environment and build a stronger sense of community.

For young Singaporeans, Culture, Community and Youth Minister Grace Fu and her ministry are working with youth to create a vision of Singapore 2025 through the Youth Action Plan.

And in social mobility, Social and Family Development Minister Desmond Lee and Education Minister Ong Ye Kung will be leading their respective ministries to work with community groups to support the disadvantaged and give them a good start in life.

"We are also reaching out to many Singaporeans with the help of thousands of volunteers, and we can do more," Mr Heng added.

He cited the Community Network for Seniors led by Health Minister Gan Kim Yong to build a community of care and support, the SG Secure initiative led by Home Affairs Minister K. Shanmugam to galvanise the community in times of crisis, and Smart Nation Ambassadors - led by Foreign Minister Vivian Balakrishnan in Smart Nation efforts - who help citizens use digital technology in a human-centred way.

"We will encourage and support individuals and groups to come together for the common good," said Mr Heng, who noted that the pace of partnerships between like-minded people coming together to take action has picked up over the years.

For instance, the Friends of Ubin Network has seen academics, residents and members of the heritage community coming together to brainstorm and develop new initiatives for Pulau Ubin.

Tackling issues like building resilience and an inclusive society

Working with Singaporeans to create a shared future

He called for more Singaporeans to join in efforts to solve problems and make a difference for the nation. "We may have different views, but so long as you have the good of Singapore at heart, we can work together," he said.

Mr Heng also made reference to the "democracy of deeds", a phrase pioneer leader S. Rajaratnam coined in 1971 to describe the sort of society Singapore should strive towards.

Mr Rajaratnam had hoped that Singaporeans would get involved in solving the fledgling nation's problems, working in partnership with the Government in doing so.

"Partnership is about more than contributing feedback, suggestions or ideas," Mr Heng said.

"It is about following through on ideas and suggestions and making things happen.

"Our future Singapore - the Singapore we are building together - must be an expanded democracy of deeds, with citizens taking action to make a difference."