SINGAPORE - After three weeks of accusations and rebuttals, the public feud between the three children of founding prime minister Lee Kuan Yew over their family home has taken a conciliatory turn.

In a seven-page joint statement on Facebook, they said: "We look forward to talking without the involvement of lawyers or government agencies" and added: "We do not wish to see Singapore embroiled in a never-ending public argument. For now, we will cease presenting further evidence on social media, provided that we and our father's wish are not attacked or misrepresented."

The two had gone public with their dispute on June 14, accusing PM Lee of blocking their father's wish to demolish 38 Oxley Road because he wanted to inherit Mr Lee Kuan Yew's political capital. They accused him of abusing his power by hijacking organs of state to pursue his goals. PM Lee has denied their allegations and addressed their charges in a two-day Parliament sitting this week. He also said during the Parliament session that he hoped to reconcile with his siblings one day.

The sticking point between the two sides is the interpretation of Mr Lee Kuan Yew's wish to demolish the house. The younger siblings said that their father was against preserving the house because he did not want to create a monument to him while PM Lee said the founding PM was open to preserving parts of the house because of the heritage value. The basement dining room of the house was the meeting place for founding members of the People's Action Party.

I hope that with the passage of time and cooling of emotions... that the siblings can work through the disagreements. But government still has to carry out its responsibilities for those issues that are of public interest fairly, objectively and calmly. And I will continue to do so.

In their latest statement, the younger siblings disclosed that they have not spoken to their elder brother since April 12, 2015 when Mr Lee Kuan Yew's will was read. Mr Lee died on March 23, 2015, aged 91.

They repeated their charge that Parliament was the wrong venue to address the issue as PAP MPs are beholden to PM Lee and cannot be impartial.

"We love Singapore, and want only that it prospers, under a government that has integrity and respects the rule of law. We would not have brought this dispute into the public eye, if there was a neutral and unbiased venue to resolve our differences in private," they said.

They also apologised to Singaporeans for taking their quarrel public. "We are private citizens with no political ambitions. We have no unfiltered access to mainstream media, and are not savvy with social media. We have made a lot of mistakes along the way; please forgive us." 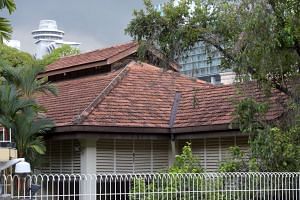 "We seek only to honour our father Lee Kuan Yew's demolition wish," they noted.

Referring to the ministerial committee set up to consider options for the house, they said that they are glad that the committee has acknowledged that it has no authority to rule on the validity of the will and that they will not be making "further submissions to the committee in its current form."

Thanking Singaporeans for their support, they said: "We know some of you have very different views about the house and its preservation. We respect your views and your voice. You have our heartfelt thanks."

"Ultimately, it is up to the government, and the people of Singapore, to decide whether and how to hold (PM) Lee Hsien Loong to account," they added.

Deputy Prime Minister Teo Chee Hean said on Thursday afternoon in a Facebook post: “I hope that with the passage of time and cooling of emotions... that the siblings can work through the disagreements.”

“But government still has to carry out its responsibilities for those issues that are of public interest fairly, objectively and calmly. And I will continue to do so,” he added in the note accompanying a video of his speech in Parliament during the two-day debate on Monday and Tuesday on the issue.

In a separate post sharing another video clip, he said: “There really is no good reason for such a public furore...”