Prime Minister Lee Hsien Loong and Chief Justice Sundaresh Menon have paid tribute to outgoing Attorney-General V.K. Rajah as "an innovative thinker about the law", and for his "outstanding contributions" to Singapore.

"In every appointment, you have carried out your duties with dynamism and commitment. You have improved our legal system and made a difference to future generations of lawyers," PM Lee said in a valedictory letter to Mr Rajah last week that was released to the media yesterday.

Chief Justice Menon said of Mr Rajah during his speech at the Opening of Legal Year 2017 event yesterday: "You have devoted yourself tirelessly to advancing the interests of justice throughout your career. There can be no higher calling for a lawyer; and you have discharged it with great distinction."

Mr Rajah will retire as Attorney-General on Saturday on reaching 60, and will be succeeded by Mr Lucien Wong, 63. 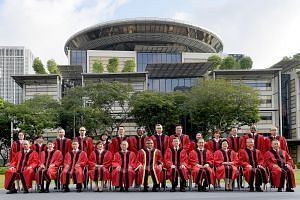 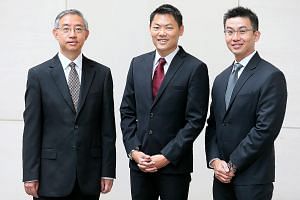 Mr Rajah began his public service career as a judicial commissioner in 2004 after 20 years in private practice and was then one of Singapore's leading commercial lawyers.

Within a year, he became a Supreme Court judge, and three years later, he was made Judge of Appeal - a position he held until 2014.

PM Lee noted that Mr Rajah left his "mark" during his decade on the Supreme Court bench, "contributing prolifically to Singapore's jurisprudence" and that many of his judgments "have shaped the development of Singapore law".

"Of particular note were your decisions that concerned criminal law. You delivered landmark rulings that clarified the law on criminal liability for common intention, as well as aspects of the law on sentencing. These judgments reflect your commitment to a fair criminal justice system that tempers justice with compassion."

PM Lee also commended Mr Rajah for helming several committees "which have enhanced the administration of justice and the vibrancy of our legal profession".

PM Lee cited the Committee to Develop the Singapore Legal Sector as perhaps the most significant, noting it reviewed the entire legal services sector, and made bold and important recommendations.

Both PM Lee and Chief Justice Menon lauded Mr Rajah's move in a 2015 case where the prosecution for the first time appealed for a reduced sentence on behalf of the accused person because he considered it to be manifestly excessive.

"As Public Prosecutor, you were steadfast in upholding justice and fairness as guardian of the public interest," said PM Lee. "You emphasised fair prosecution and outcomes, even when cases did not go in the Chambers' favour."

PM Lee revealed that Mr Rajah had declined the offer to continue as Attorney-General beyond his current term as he wanted to retire and pursue a more active role in arbitration. "I respect your decision, and look forward to your contributing in this new capacity to promote Singapore as an international arbitration hub," said PM Lee.

Mr Rajah, speaking at the Legal year event, said he found his work gratifying and the law "a most meaningful and fulfilling profession".

Stressing that "law is a force for common good", he had these parting words for lawyers: Have a sense of higher purpose and hold on to it.

"Do not be afraid to embrace and champion bold ideas for an even stronger and better legal system, and always approach your work with both your head and heart," he said.

A version of this article appeared in the print edition of The Straits Times on January 10, 2017, with the headline 'Outgoing A-G praised as 'an innovative thinker about the law''. Subscribe
Topics:
More
Whatsapp Linkedin FB Messenger Telegram Reddit WeChat Pinterest Print Purchase Article Copy permalink