Great cities have great streets, and many of them are pedestrianised, veteran urban planner points out

Pedestrianisation of Orchard Road is a step in the right direction, said observers, as they flagged considerations and floated suggestions for the proposal to work.

"Great cities have great streets, and many of them are pedestrianised," said urban planner William Lau. The former president of the Singapore Institute of Planners gave the Myeongdong shopping district in Seoul as an example.

"It is very vibrant. The shops spill out onto the street there," he said, adding that accommodation would have to be made for buildings which are accessible to vehicles only via Orchard Road.

Redirecting traffic around the area may be difficult as it is not built on a grid, said National University of Singapore transport researcher Lee Der Horng.

But Mr Gopinath Menon, transport consultant and senior research fellow at the Nanyang Technological University, felt pedestrianisation could be done with little impact to vehicular traffic. He suggested that Orchard Boulevard, which runs parallel to Orchard Road between Orchard Link and Grange Road, could be converted to a two-way road to accommodate traffic. Public transport can serve as an alternative to cars for shoppers headed to the area. 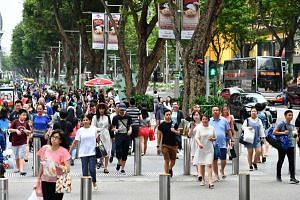 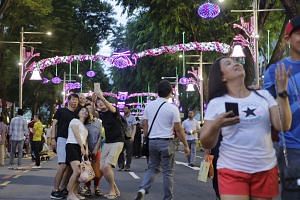 Where pedestrians are kings of the road: 5 scramble crossings from around the world

He said the area was already served by three MRT stations - Orchard, Somerset and Dhoby Ghaut - while a fourth, the Orchard Boulevard station on the Thomson-East Coast Line, is due to be ready by 2021.

Dr Lee suggested that trams - similar to those found in cities such as Zurich - could be introduced as an alternative form of transportation.

But Mr Kevin Wee, senior lecturer at Nanyang Polytechnic's Hospitality and Tourism Management programme, said that while pedestrianisation will enhance Orchard's appeal and draw more tourists, its effect on retail remains to be seen. "You can make it happen but if nobody shops, you still have the same problem." More pedestrian space also means security must be beefed up to prevent terror attacks.

As for suggestions to have a scramble junction that allows pedestrians to cross in multiple directions at the same time, similar to the one in Shibuya, Tokyo, Mr Menon said the idea was not new to Singapore. Pedestrians have been able to cross diagonally at the junction of Boon Tat Street and Robinson Road for almost 20 years. Between 2006 and 2007, a trial scramble walk was held at the junction of Orchard Road and Bideford Road.

"We think this idea is worth exploring again," said the STB, adding that the new trial is meant to improve walkability and create "street-level vibrancy".

However, it is only suitable when there are many pedestrians, said Mr Menon, adding that vehicles will likely experience more delay than at normal signalised junctions.

Shoppers were also supportive of having such a junction. Student Gracia Lum, 22, said having a diagonal crossing would "minimise the commute" between some buildings.

10 other pedestrianised malls around the world. http://str.sg/pedesmalls