It is less than two weeks to Chinese New Year but many shoppers have yet to pick up their festive essentials. Retailers attribute this to the proximity of Chinese New Year, on Jan 28, to Christmas in December. The Sunday Times looks at what shoppers can expect as they head out to buy their food and plants to usher in the Year of the Rooster.

Weather woes are hitting fruit prices. Be prepared to pay up to 15 per cent more for mandarin oranges this Chinese New Year.

Boxes of the swatow, lukan, ponkan and kinno varieties, weighing between 2kg and 8kg a box, cost between $10 and $30 each at FairPrice. Last Chinese New Year, they cost between $8.70 and $26.

Cold Storage had earlier said that Typhoon Megi, which hit Taiwan last September, and frost in China this month had caused a 20 per cent drop in supply of the fruit.

This has translated into a 15 per cent price hike for the ponkan variety, while prices of its 10 other varieties of mandarin oranges - from China, Taiwan and Pakistan - have stayed about the same, said a Cold Storage spokesman. 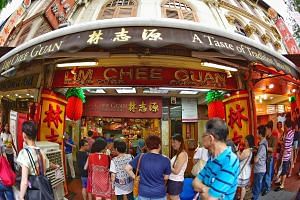 Another festive fruit, the pomelo, which symbolises prosperity, 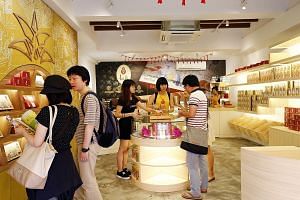 Goodies staying at a good price

is also in shorter supply, as an earlier Chinese New Year means the fruit has less time to reach maturity. Pomelo harvests are down by 20 to 30 per cent, said a Sheng Siong spokesman. But the chain has kept prices the same as last Chinese New Year. 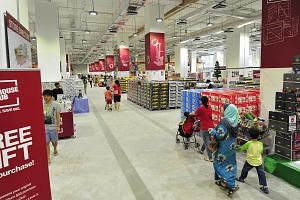 CNY prep: 6 places in Singapore where you can buy wholesale goods

Festive plants such as kumquats and pussy willows, however, have been spared the price hikes with nurseries noting that supplies from China, Taiwan and Malaysia were stable. Demand for these plants is expected to pick up from this weekend onwards.

Meanwhile, plant nurseries have introduced new plant arrangements to reflect the Year of the Rooster. Far East Flora, for example, is offering a potted plant that features a figurine of a golden rooster, while wholesaler Ji Mei Flower is selling plants in pots with rooster prints.

But rooster-themed products have not been all that popular, said Mr Mok Keng Houng, business manager at Ji Mei Flower. "There are buyers, but not many," he said.

Even so, many outfits like Sinflora, Far East Flora and Ji Mei Flower still offer traditional favourites such as four season lime and chrysanthemum plants.