Only one in five Singaporeans sees terrorism as an imminent threat, even though most acknowledge that Singapore is a target for terrorists, a survey done by the Government has found.

The Ministry of Home Affairs (MHA) revealed these numbers alongside the second Singapore Terrorism Threat Assessment Report that it released yesterday.

For this study, 2,010 Singapore citizens and permanent residents representative of the national population and aged 15 years and above were polled last June and July.

According to MHA, close to 60 per cent of the respondents recognised Singapore as a target for terror attacks, but only 20 per cent felt that an attack might occur here within the next five years.

Should an attack happen, 93 per cent felt that all Singaporeans will stand united regardless of race or religion, and 96 per cent said they were willing to help other Singaporeans, said the ministry.

Nearly 90 per cent would contact the relevant authorities should they spot suspicious behaviour in public places, but the survey found people were less likely to report such behaviour among relatives or friends - only three in four would do so.

MHA said: "Where friends and family are involved, respondents generally preferred discussing with other friends and family members on what action to take or to further observe the situation first, rather than to contact the authorities."

The survey also gave an indication of the effectiveness of SGSecure, the national terrorism awareness movement, with three in four saying they were aware of it. 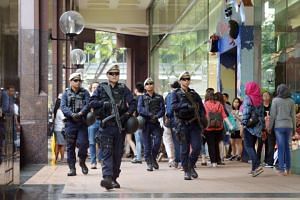 Terror groups still potent as they take the fight online

The survey also found that 92 per cent of SGSecure-aware respondents agreed it was their responsibility to safeguard Singapore's safety and security; this number was 86 per cent among those unaware of SGSecure.

MHA highlighted some efforts from the SGSecure movement, which it said has shifted its focus to preparedness.

For instance, more than 51,000 businesses have since appointed at least one SGSecure representative who will serve as their organisation's link to the authorities in a crisis and drive workplace emergency preparedness programmes.

It also said a quarter of all grassroots leaders and volunteers have been equipped with at least one emergency preparedness skill, like performing cardiopulmonary resuscitation or using an automated external defibrillator.

A version of this article appeared in the print edition of The Straits Times on January 23, 2019, with the headline 'Only one in five feels attack may happen here in next 5 years'. Subscribe
Topics:
More
Whatsapp Linkedin FB Messenger Telegram Reddit WeChat Pinterest Print Purchase Article Copy permalink